A great place to find online card games is the website for the American Association for Retired People (AARP). Most of the games are free and do not require AARP membership, so you can start playing right away!

How to Play Free Games on the AARP Site

There are few requirements for playing free card games on the AARP site.

One of the most popular card games is Bridge which may be hard to play with people on a whim, since it requires four players. Using the AARP site you can play any time with four players. If you've never played Bridge before, the AARP version has a Help and Tips section that provides easy-to-follow rules for the novice player. You can also turn the sound on and off. The game screen is colorful with large size, easily readable cards and can also be maximized to the full size of your screen.

Solitaire was a well-loved game before computers became popular and its popularity has increased with the rise of technology. Almost everyone with a desktop, laptop, tablet or smartphone has played Solitaire at least once. The AARP site is an excellent spot for Solitaire lovers because it features not one, but ten different versions of the game. Like their version of Bridge, all the games feature cards with large, easy-to-read type and the screen can be maximized as well. All the versions also include hint buttons, help areas for information on the game play rules, a sound button to toggle on and off, and a timer. 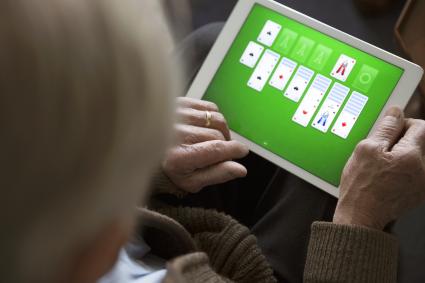 In the classic version of the game, players must move 52 cards into four sets in order by suit. It can be played by drawing one or three cards from a deck while seven piles of cards are laid on out the screen to move into the four suit spaces at the top. Solitaire is a game that can be enjoyed by one player and can range from easy to difficult, with not every arrangement leading to a final win for the player.

Addiction Solitaire is a fast-paced version of the game that sorts the cards into four rows. You need to move all the cards in the rows so they are in order by suit. Unlike other versions of the game, you are working against the time clock and can lose the game if you can't finish the game within your allotted time.

You play against the clock in Crescent Solitaire, with 15 minutes allotted to completing the game. In this version the cards are laid out in a crescent shape around two sets of four cards, the Aces and the Kings. The player must move all the cards from the crescent to the eight cards in the middle in order by suit.

FreeCell has been an extremely popular solitaire-style card game since it was introduced in the late 1960s. Features allow players to seek help on the rules and mechanics of game play, which is perfect for individuals who have difficulty using computers, or have never played FreeCell before.

This fun version has both an easy and hard version so you can level up your playing style as you get more into the game. Players have a "tableau" of cards made up of seven stacks with five cards each. A deck of 52 cards is provided at the bottom which is the "stock" and these can be placed one by one into the "foundation." Cards from the tableau are moved to the foundation as long as they are one higher or lower than that card. It's an interesting twist on the game that can really work your mental skills!

Klondike, a classic twist on solitaire, has 52 cards where players must move all the cards into one of four "foundations," which are built up by suit. Games may move quickly or slowly, and some are even unsolvable. You can choose between one-card draw and three-card draw gameplay.

This variation of solitaire stacks the cards in a pyramid and allows them to be removed in pairs as long as all pairs add up to the number thirteen. Higher cards are worth more with jacks worth 11, queens worth 12, and kings worth 13. Kings can be removed from the piles immediately. The rest of the game, of course, is pure strategy. Cards must be moved from the pyramid to the foundation in order for a player to win.

One of the most popular two-deck solitaire type games, Spider Solitaire requires players to manipulate cards and deal with obstacles to build down tableau piles by rank. Although this game was not developed as an actual card game, since the 1980s, it has been included on many computers under various names. On the AARP website version of the game, players can choose to begin with one suit of cards, or move up to two or four suits for a more challenging experience.

Like its name, in Tripeaks the cards are stacked in three "peaks" instead of the traditional classic layout. The rules are the same as Classic Solitaire but the addition of the new formation makes this game more challenging. You also must beat the clock which gives you 10 minutes to solve the game.

In this version the cards are sorted to create eight decks instead of four. Unlike in Classic Solitaire, the cards from the stock deck can be played to the cards below the foundation by suit and not alternating suits. You will also have two of each card to work with. There is an easy and a hard version of the game for more challenging and intensive play.

There are two games on the AARP online card game page that are not free to play and require you to be an AARP member. These games are: 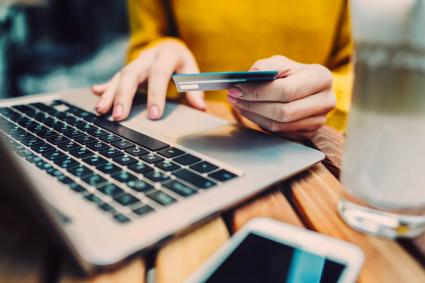 The classic casino card game where cards are dealt by the dealer to the player. Your cards must add up to 21, or closest to it without going over, to win.

This is a more challenging version of Solitaire but there are easy levels you can start with before working up to the more difficult ones. In this game, you can build the foundation piles in order but do not have to start with the Ace first.

If you're looking for a fun way to stretch your brain, card games are a perfect activity no matter how old or young you are. The AARP site has several free card games that are easy to use with colorful, visually pleasing graphics. In addition to card games, you can also find other games for free on the site including Mahjongg, arcade, puzzle and word games.

Comments
© 2006-2021 LoveToKnow, Corp., except where otherwise noted. All Rights Reserved.
Card Games on the AARP Site: A Quick How-To + Your Options