Cards games aren't just for kids! There are many games adults can play that either have a higher level of difficulty for the adult brain, or engage in "adult" subject matter that would be inappropriate for children under the age of 18. Or you can take "all ages" games and modify the rules to make them more interesting to an adult audience.

These are card games that are available for purchase and are designed for adults out of the box. You can find everything from high end strategy card games to party card games with sexual themes. Games all retail for less than $30 each.

One of the most popular adult card games is Cards Against Humanity, billed as "the party game for horrible people." The game is an Editor's Choice Pick with a 9.9 rating from the Rec Room Pick and is also an Amazon's Choice pick. The latest Green Box expansion pack has a 4.7 out of 5 rating with over 1,200 reviews and the original game has a 5 star rating with over 34,000 reviews. You can also download a PDF of the cards for free from the game's website. The game involves a deck of cards with questions with definitely adults-only humor including sexual themes. Each round involves the group deciding on which player has the best answer to the question card from the round. A minimum of four players is needed, and the game plays best with a group of between four to eight people. 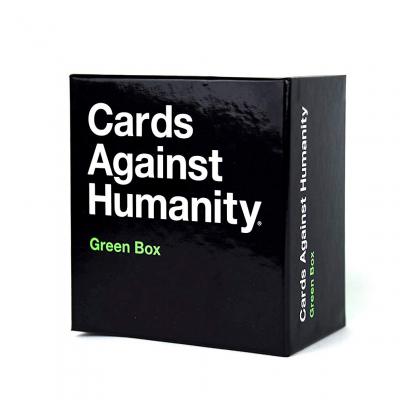 Another very popular card game is Exploding Kittens, which has the distinction of being the game that raised over $8 million in its initial Kickstarter launch. The game is an Amazon's Choice product with a 4.4 out of 5 rating from over 13,000 reviewers. The game's card feature funny cartoons engaging in crude adult humor and mature situations. Players pull cards from the deck trying to avoid the exploding kitten card which eliminates them from the game. The winner is the last person to have strategically avoided pulling the exploding kitten card. The game is designed for two to five players. 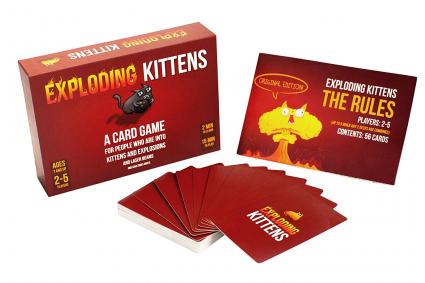 Business Insider highlights Joking Hazard as the best visual card game for adults. The game has a 4.7 out of 5 rating from over 1,600 Amazon users. The object of the game is to create three panel comics using the cards on "friendship, violence, sex and everything in between." Each player places a card from their deck to move the "story" along. The subject matter often deals with shocking and potentially offensive situations played for humor. The game needs a minimum of three and maximum of 10 players, or as the box art states "bad people." 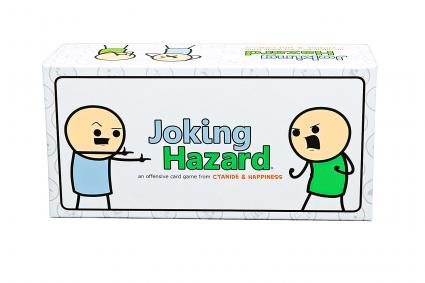 The Metagame by Local No. 12

Not all adult card games deal with sexual themes and inappropriate humor. The Metagame is one of Bustle's picks for the 10 best card games for adults. The game has a set of culture cards and opinion cards that focus on intellectual topics like art, politics, the media and other topics of debate. The game can actually be played seven different ways depending on whether you're looking for fast, strategy or challenging game play or lively discussion and debate. It can be easily played with only two people up to six, although one of the game modes, "massively multiplayer metagame" can be played by as many as 50. If you enjoy the game there are several expansion packs based on science fiction, games, and film as well as rules for additional game variations on the manufacturer's website.. 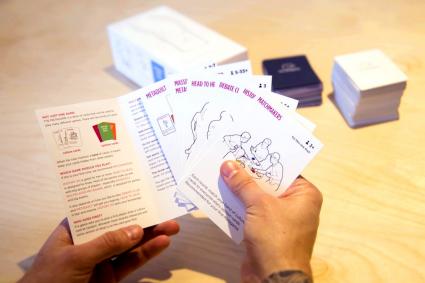 The Metagame by Local No. 12

What Do You Meme?

Brit & Co, the digital media company for women, highlights What Do You Meme on their choices for best party games "like Cards Against Humanity." This game should thrill adults who love social media memes and are comfortable with some very mature humor. Players are dealt a series of caption cards and a photo is provided for each round. The winning caption card is chosen by the group. The game can be played with a minimum of three players to as many as 20. It's an Amazon's Choice product with a 4.6 out of 5 star rating with almost 6,000 user reviews. 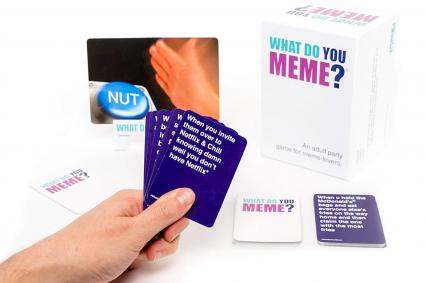 WHAT DO YOU MEME? Party Game

Bar Games 101 has Unstable Unicorns on their list of fun card games for adults. The game is one of Kickstarter's "Top 50" most backed projects and is designed for two to eight players. The original version of the game is suitable for children 14 or older so for a truly adult experience you can buy the NSFW base game as well as the NSFW expansion pack. Players compete with their deck of cards to build an army of seven unicorns, using fast-paced, strategic game play. 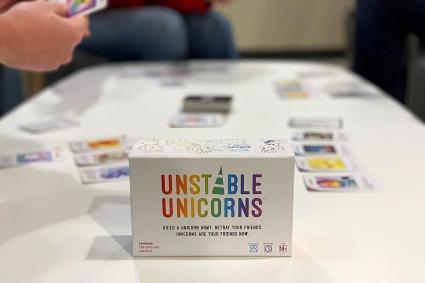 For adults who love popular games but want to try something new, DailyDot recommends the game Charty Party. In this card game players are provided with a graph and then choose from a series of caption cards for the best label for the Y axis. The subject matter of the cards are decidedly adult, including drugs sex and emotional themes with a humorous bent. The game is an Amazon's Choice product with an average rating of 4.3 out of 5 stars. The game is designed for three or more players and is a good choice for a large group party. 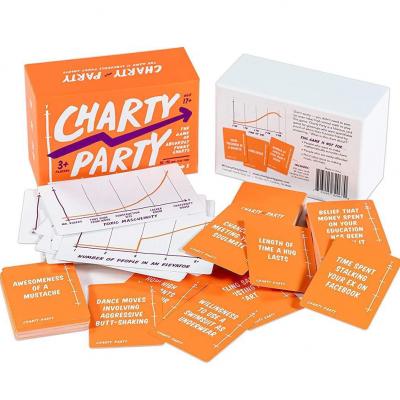 Gear Hungry's review of the best adult card games picks Utter Nonsense as the best value game and the game retails at about $15. 94% of Target users would recommend the game to other players. The game is designed for between four and 20 players and the content on the game cards is definitely adults only. Topics may include drinking, sexual situations, and crude humor. The game is simple to play as player draw cards and are asked to perform using silly accents, voices and impressions. The game "judge" picks the winner for each round. 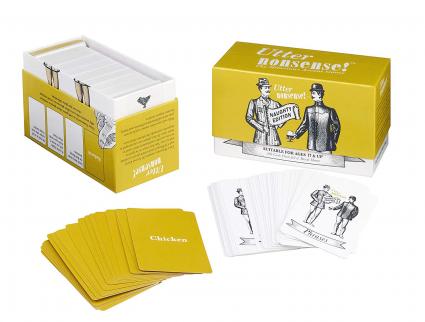 Never Have I Ever

Never Have I Ever is a fun game for adults willing to laugh at their past mistakes. Best Products picks it as one of their choices for adult party games with "just the right amount of raunchy." Over 1,100 Amazon reviewers give the game a 4.1 out of 5 star rating. Billed as "the game of poor life decisions," this card game uses a deck of cards to get adults to admit, in a hilarious setting, previous life situations involving mature themes you probably don't want your kids to learn about! The game can be played by four to 12 players although it can accommodate large groups too. 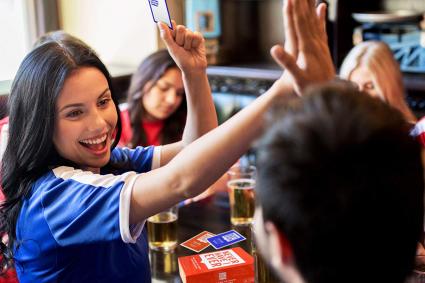 Almost any classic game can be altered to become more of an adults-only game. A common way to do this is to include stripping, such as Strip Poker.

For Strip Uno, an adult rules change is simple. When someone wins a hand, they get to choose to have one other player of their choice remove an article of clothing. Or, you can up the ante and have them get to choose which specific piece of clothing to remove, or everyone that loses a round has to remove a piece of clothing. Another option is to have the losing player with the highest amount of points on their remaining cards be the one to remove clothing.

One easy way to make poker an adult game is by playing hands for real money. Another way is to make a strip version where the players who lose each round need to remove a piece of clothing. You can also alter the rules so only players who are left holding a specific card in a losing round, such as aces or a pair, to be the one who has to strip. Another variation is to add up the card number values and the player with the highest or lowest remaining number be the one to strip.

In the game of Cheat, also known as "I Doubt It," the deck is dealt equally to everyone. In each round, the players put between one to four cards value side down on the table in a group stack. Each player says the number of points for their cards and it must be either the same or within one point lower or higher of the previously played cards. If a player declares "cheat!" on a player, they must show their cards. If they did cheat, they need to take the stack of cards and play them. If they weren't cheating, the person who called them a cheat must do so. You can turn this into an adult game by either adding in a penalty with the cards such as stripping or a round of Truth or Dare where the player can erase their card penalty if they successfully state a truth or complete a dare.

Playing card games with adults can be a fantastic way to learn more about your friends and adult family members. Not all "adult" games necessarily have to involve raunchy humor and sexual themes. Whether it's a game that involves high end discussion and debate or complex strategy, you can find a game that works for your group's interests and personalities.