Monopoly is one of the most popular board games of all times but sometimes adults are looking for a game with a bit more spice. There are several "adult" versions of Monopoly that you and your adult friends can enjoy playing at your next party.

Adding a drinking element to a Monopoly game can definitely make it more adult. These games all feature an alcohol theme. You can increase the adult nature and fun of the game by enjoying the alcoholic beverages featured on the game boards and cards.

Brew-Opoly is the game for beer drinkers who always wanted to run their own microbrewery. Instead of properties, the game board features lagers, ales, stouts and pilsners of America's award-winning microbreweries. The player pieces include a bottle top, bottle opener, beer mug, and a pilsner glass. You increase your "property value" by buying brew and kegs for your microbrewery monopolies. As with all Monopoly games, the object is to have the most money at the end of the game.

If wine's your thing, Wine-Opoly could be the perfect game for your next adult party. Players start by choosing their token (a wine bottle, cork, wine glass, cheese, grapes or a carafe). Players can buy wines (the traditional properties), collect grapes and trade them for decanters. Players who are new to wine can learn while they play if they take advantage of the wine fun facts on the back of each deed card.

Dubbed "the blurriest game ever!" by the manufacturer, Drinkopoly features a game board with different tasks party goers need to complete which involve drinking alcohol. The game gets a 4.6 out of 5 rating on Amazon with over 300 reviewers. The game is designed for people of at least legal drinking age as alcohol is a big part of the game, as well as other tasks that involve sexual and adult humor themes.

Monopoly Games Based on Mature Culture and Media

Some themed Monopoly boards are adults only because they are based on popular cultural media or topics that are not for children.

This gameboard is based on the popular and raunchy Marvel superhero Deadpool. Much like the movies, the game is definitely R-rated. The properties on the board are contracts with various mercenaries and instead of houses you build headquarters and D-Mansions. Fans of the movies and comic books will love this fun mashup of Monopoly and Deadpool or as the manufacturer says "like peanut butter and fried trout, it's a perfect match!"

This version of Monopoly is based on the hugely popular HBO show and like the show, is definitely not for children. The properties on the board are transformed into locations from fabled Westeros and the game pieces are the sigils of the various houses. You build holdfasts and castles instead of houses and hotels and the object of the game is to amass the most wealth and "win" the game of thrones. Fans of the show will also love the miniature Iron Throne card holder that plays the show theme song. 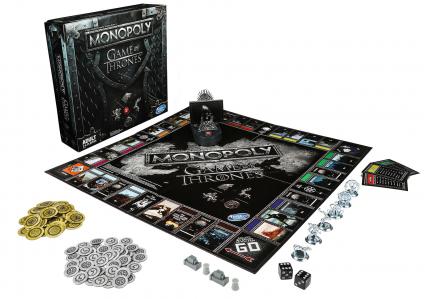 Game of Thrones Monopoly Board Game

Based on the popular and long-running zombie television show, this Monopoly board has a definite macabre twist. The game board spaces all have an apocalyptic theme that fans of the show will enjoy and recognize. The tokens will also be a hit with show fans as they include character Rick's revolver, Michonne's sword, a zombie head and Carl's hat. The game gets a 4.7 out of 5 star rating on Amazon.

Another way to make a Monopoly game adults-only is adding in a sexual element. Sex Monopoly is designed for consenting adult couples to play together or in a group depending on which version you choose.

In XXXopoly, the Monopoly game board properties are instead a series of different sexual activities from the mild to much more intimate ones. It's definitely a game for couples who already are having a physical relationship (or want to start one!). The game is designed to facilitate foreplay and communication with your partner about sexual needs and desires. As players move along the board, they need to purchase "sexual spaces" to get monopolies, and if you land on an owned space, you must perform that act. An additional feature are "time chips" which you can buy that will increase the amount of time the other player must perform an act, although they can also pay rent on the space to avoid that option.

For players who enjoy traditional Monopoly but want a more luxurious version that suits adults more than children, they can consider the WS Game Company Monopoly Glass Edition. This game sells for about $80 and is an elegant take on the traditional board. The board is made from tempered glass and is raised up on four acrylic feet. The houses and hotel pieces are all made from translucent material and the tokens are all zinc die cast. All in all, this is a beautiful set that adult fans of classic Monopoly will cherish and will feel proud to show off at their next cocktail party.

Monopoly has been a beloved classic game for decades but it can get boring, especially for adults. Luckily if you seek more of a challenge, want a gameboard that tackles adult topics like drinking or sex, or just want to have a more refined experience, there's a Monopoly version out there for you and your friends!