Senet, an ancient Egyptian board game for two players, is played on a 30 square board with 3 rows of 10 squares each. At the beginning of the game, alternating colored markers are placed on the squares in the first row.

The object of the game Senet is to move your pieces off the board by moving them in a zigzag pattern to the 30th square. Egyptians used four flat sticks that were dark on one side and light on the other. Depending on how the sticks landed, you could "roll" a 1, 2, 3, 4, or 6. If you roll a 1, 4, or 6, you get another turn. Your goal is to move all your pieces off the board.

Sound intriguing? You can play Senet in a modern-day version. Crafted from wood, this unique ancient Egyptian game follows the ancient rules and allows players to take a trip back in time.

The Ancient Egyptian Board Game Mehen, or Snake

Mehen was a popular game for the lower classes because the game board could be drawn or carved into any surface, including a dirt floor. Wealthier Egyptians had game tables made on a pedestal, resembling a mushroom.

A snake is coiled around the board and players start at the tail. The body of the snake is split into squares; a typical snake had about 60 squares to push through. The object is to be the first to move your piece from the tail to the snake's head. Up to six players used lions and lionesses and ball pieces to maneuver around the board.

Seega is an ancient Egyptian board game similar to strategy board games like modern checkers and Go where you attempt to capture your opponent's pieces. Some Egyptologists have even likened Seega to the modern day Risk.

Gameplay is on a 5 x 5 board. To start, players place two pieces on the board, one player on the X's and other on the O's (see picture). Then, each player alternatively places the rest of their 10 pieces on the board while leaving the center square empty. 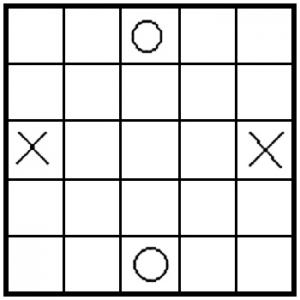 You capture a piece when you move your piece and 'sandwich' an opponent's piece. Pieces can only be moved into empty, non-diagonal, and adjacent squares. You can move pieces into a space that is sandwiched by your opponent. This makes your piece safe. If a player can't make a move at all, then that player can remove one of the opponent's pieces to make room for a move. One last rule is that if, after making a move and capturing a piece, that same piece can move again and capture another piece, then that player can continue to move that piece. It is possible to have two, three, and four move combos.

Aseb, or The Twenty Squares Game

Aseb is played on a 20 square board where there are 3 rows of 4 squares and then the middle row protrudes out 8 more squares. Players start on the shorter rows and attempt to move their pieces off the board, by moving down the long row until they reach the last square. Four of the squares include extra turns.

To start, a player must throw a 4 or a 6 to move their pieces from their reserves, then throw again to move it. If a player lands on a square with an opponent's piece, the opponent's piece is moved back into the reserves. This ancient Egyptian board game is sometimes mistaken for the Royal Game of Ur and Tjau, the Game of Thieves.

Considered the oldest board game in the world with ruins going back to 1400 BC Egypt, Mancala can be played on a board of wood or ivory or it could be played by digging holes in the ground. On the board, you'll find two rows of 6 pits or holes. You'll also need marbles or stones to place in the different holes. Each of the 2 players have a mancala at the end of the board to hold stones.

Place 4 stones or marbles into each of the 12 pits. Each player only moves stones from the six pits closest to them. The game ends when one side of the board or six pits are clear. While there are several rule sets and ways to play, here are a few common rules:

A current version of the game Mancala is available at several retailers. The modern game comes in versions for kids and adults. The rules set can be a little different depending on the game that you buy. The basic premise to count and capture is retained no matter which version you use.

If you are looking for new board games to play, try out some of the classic Egyptian games for a fun ancient Egypt activity. They don't require fancy equipment or have in-depth rules; you can pretty much get started in a matter of minutes. Boards can be drawn on paper or etched into wood and pieces can be as simple as checkers you already have or rocks sitting outside your door. Playing those old games can give you an idea of what people did to pass the time and may just pass your time with much enjoyment.