Apples to Apples can be a fun and exciting card game with lots of different variations. Keep the boredom at bay by switching up the rules, instructions and directions. You can even try out different versions of Apples to Apples like the drinking game or junior and Bible editions.

Instructions for Apples to Apples

Apples to Apples (less than $15) is all about picking the best card and designed for 4-10 players. The object of the game is for the players to select the best red apple card from their hand to match the word on the green apple card selected by the judge. The game is very easy to learn and moves quickly. It only takes about 20-30 minutes to play. So, it's a great game to play when you're bored. 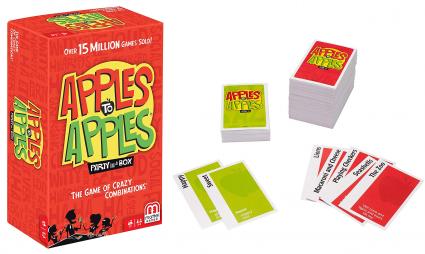 After shuffling and placing the cards in their respective trays, the game starts by the players choosing a player to be the starting judge.

Now that you have the game set up and are ready to play, it's time to check out the rules of engagement.

Variations on the Basic Rules

When it comes to a fun and silly word card game, as you can imagine, there are a lot of variations on the standard rules. This can make the game more interesting and just add to the overall excitement.

Just add alcohol to make this hilarious game into a drinking game for adults-only. The rules are basically the same, with the exception that if you aren't the round winner or the judge, it's shot time. It's easy to see how this game could get tipsy fast.

In this variation, two green apple cards are flipped, and you need to pick the best red apple card in your hand to describe them both. Trying to find one card that fits both the best can be quite the challenge.

This version is all around going in reverse. Players use the green "adjective" cards to describe the red apple "noun" card. That rowdy rhino is definitely fierce.

Some other ways to play include:

The Apples to Apples fan website, Munching Apples, provides variations and rules to more than two dozen games including the following:

Apples to Apples Game in the Classroom

The Apples to Apples game is also an excellent learning tool used in many classrooms. Although the recommended playing age is 12 and up, most children as young as 10 can easily grasp the concept of the game and enjoy playing it.

As a learning tool, the game helps to:

Apples to Apples is a fun and loud game that can get pretty interesting. Therefore, it comes as no surprise that it can come in several editions. Check out a few of these winners that range in price from about $15 to about $50.

Designed for kids ages 9 and up, Apples to Apples Junior works to simplify the game while building a child's budding vocabulary. They get to make crazy comparisons and learn a little too. Now, will you pick monkey or pickle to go with that crunchy green apple card?

The Jewish edition of Apples to Apples is based on religious themes like family, culture and history. Jewish players will push their religious knowledge while trying to make meaningful and sometimes hilarious comparisons.

Following the original rules set, the bible edition puts a religious spin on the cards. Don't be surprised if you find a David and Goliath word war.

Originally published in 1999 by Out of the Box Publishing, Mattel acquired the manufacturing, marketing and distribution rights to Apples to Apples in 2007. Since its introduction, the game has won many awards including:

Apples to Apples is a fun and fast paced word comparison game that can lead to all kinds of hilarity. With several variations and editions, it's truly a game that any family can enjoy.

Comments
© 2006-2021 LoveToKnow, Corp., except where otherwise noted. All Rights Reserved.
Apples to Apples: Rules of the Exciting Card Game