If you love words, who dunnit games, and a little trickery, you'll love playing the Balderdash board game. This game of made-up definitions is great for small groups like families, classes at school, and youth groups.

The word "balderdash" is defined as "oral or written communication that is silly or dumb." This educational and fun game is a word game, trivia game, and strategy game. Subtitles for the original Balderdash board game include "The Hilarious Bluffing Game," "The Classic Bluffing Game," and "The Game of Twisting Truths." 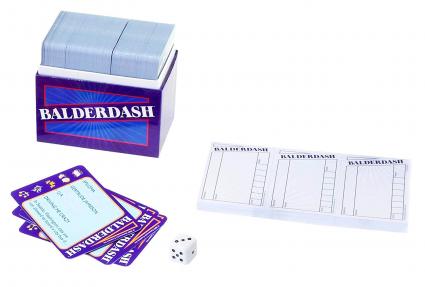 Brief History of the Board Game Balderdash

The Balderdash board game is based on the old parlor game Dictionary, where players would be given four to five possible definitions for an obscure word selected by one of the players from the family dictionary. The parlor game was very popular because the only skill required was the ability to bluff all the other players. The well-loved parlor game was recreated and published as a board game in 1971 called The Dictionary Game. In 1984 Mattel reintroduced The Dictionary Game with a new name, Balderdash.

How to Play the Balderdash Board Game

No matter which year your Balderdash game was published, the rules and gameplay remain similar. Your game should come with a set of rules, but if you can't find them or bought the game used, these directions can help you play.

While the look of the game board, cards, and answer sheets may change from year to year, these are the basic elements of the Balderdash board game setup. If your game is missing pencils and answer sheets, you can simply use scrap papers cut into equal sizes and any writing utensils of the same color ink/lead.

Strategy plays a role in Balderdash because you'll want to choose a focus that will help you win the game.

Examples of Balderdash Words and Definitions

There are thousands of words used in Balderdash board games and each comes with its real definitions. Check out these examples of words taken from Balderdash game cards to get idea just how wacky the game can get.

Variations of the Balderdash Board Game

Balderdash is best played with five to six players, so you may want to vary how you play with fewer players. Different versions of the classic board game also have different types of words and altered game play.

How to Play With Two or Three Players

The fewer the number of players, the fewer the number of definitions there are for players to select. To make the game more challenging for smaller groups, the Dasher can submit a bluff definition in addition to the real definition. The Dasher could also pick one of the words on the game cards and read all definitions listed on that card to one opponent. If the other player selects the correct definition, he or she scores two points and moves two points on the game board. If the player selects the wrong definition, he or she only receives one point and moves one space on the game board.

Other Balderdash Board Games

The popularity of the Balderdash board game warranted the creation of several modified versions over the years, each geared toward a specific group or niche of players.

Once you've already played all the versions of Balderdash you can find, you might want to try other similar board games.

Where to Get Balderdash Games

The current version of the Balderdash board game is made by Mattel and can be purchased at Walmart, Amazon.com, Target or the Mattel Shop. Older versions are available at yard sales, thrift stores, and on websites like eBay. While you won't find sanctioned online versions of the game or apps, you can find app games that are similar. Pscyh! Outwit Your Friends and Bluffinition are both free to download from the Google Play store and are nearly identical to Balderdash.

The Game of Twisting Truths

Balderdash is a great board game for those who think they know each other well and those who have just met. You'll be asked to bluff your way through the game while trying to figure out every other player's bluffing strategy. In this fun party game, there's no such thing as a dumb answer!