The origins of chess aren't exactly clear, but it is believed to have been derived from similar games played in India, and since the early 15th century, basic chess rules have remained constant.

The game of chess remains a game that is easy to learn but nearly impossible to master.

Think of chess as a game of trap. It's a battle of wits, direction and misdirection. Your goal is to trap your opponent's king. If you are up against a very good player then your goal may change to forcing a draw. You have to look at the game from every possible angle and direction, understanding all possible movements.

The Chess Pieces and Their Movement

The game is based on both sides being completely even. Each side has the exact number of squares and an even amount of the same pieces.

These are your first line of defense and are used to help corner attacking pieces, lead an attack and defend. They will be put into harm's way and used as fodder and bait.

When your pawns are in their initial spaces, they may move up to two squares straight ahead. After the initial movement, the pawn may only move one space ahead, and they attack one space on the diagonal.

Arguably speaking the rook could be considered the most powerful piece in chess especially when both your pieces are working together. Many people also refer to the rook as the "castle". The Rook may move as far as it can in a straight line forward, backward and to the side. It can never move diagonally, and you can only attack and capture pieces along its intended path.

Typically the protector of the king, the knight performs the same duty in chess. The knight is a diverse piece and is the only one able to move over other pieces making it difficult to pin down. It makes an effective guard and attacker.

The movement of the knight is restricted to an "L" shape or right angle. Sometimes the movement is described as a 2-1. Basically you can move your knight two squares up, down, left or right and one more space to form an "L" out of the movement.

The placement of the bishop next to the king is meant to symbolize that the Church sanctions marriage. Don't let the hats fool you because the bishop is a dangerous piece and can often strike without notice.

Movement of the bishop is strictly diagonally either forward or backward and that is the only way it can capture pieces as well. It may move one square or the entirety of the board - your call.

Many games of chess have been won or lost based on the use of the queen. The old adage stands up in chess: behind every strong man is a powerful woman. The queen is that power, and she has to be looked after and her power not abused.

Power in movement is the queen's key strength. She can move anywhere she wishes, attack however she wants and can move one space or move the length of the board. She has to be move in straight lines or diagonally so she cannot move in "L" shapes like her knights.

His majesty is the most important piece in the game for without him all is lost. The king must be defended at all costs, and the other soldiers will gladly lay their lives on the line to this end.

Movement of the king is greatly limited to one space in any direction. He may move one space up, down, left or right; one space diagonally in any direction. Once your opponent's pieces have cornered him to the point he cannot move and your defenses are lost, so is the game.

Basic Movement for All Pieces

The following are the basic chess rules that apply to every piece on the board:

Basic Setup of the Chess Board

Now that you know the pieces and their duties, it's time to place them on the board. Make sure the board is facing you with the white square at the bottom right corner as shown below: 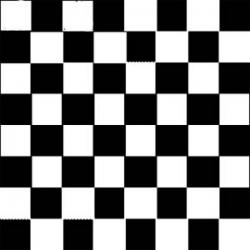 Setting up the chess board is easy, and it is the same for both sides. The graphic below shows where each piece goes: 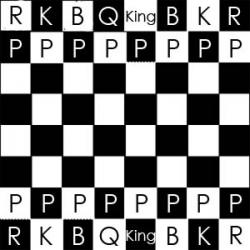 The piece designations are as such:

There are some rules in chess that are among the basic ones, but are a little more difficult to understand for beginners.

Castling is a move that takes your king out of harm quickly. You essentially are switching the rook with the king, but both pieces must NOT have been moved during the game prior to castling, and there may not be any pieces between them. The king may also NOT be in check or pass through check.

Only a pawn can be promoted in the game of chess. A promotion occurs when your pawn reaches the last line of spaces of your opponent. The pawn can then become any other chess piece much like "kinging" in checkers.

En Passant or In Passing

Since pawns may move two squares initially, the pawn may end up directly next to an opponent's making it unable to be captured. This rule states that as the pawn "passes" by an opponent's that opponent may capture it as it pass bys, but it must do so immediately.

Sometimes a game of chess will end in a draw with no clear winner. There are several reasons how that can happen: