What Is the Beat the Parents Game?

The Beat the Parents game is an exciting board, card, trivia game that pits children against parents or other adults. It levels the playing field by adding questions for kids that parents would know and questions for parents that kids would know.

Who Is It Designed For?

Beat the Parents trivia game is designed for everyone! It is a good choice for family game night or anytime you want a family board game. It is great fun for adults and kids to play together - either one or two kids plus an adult or two or a large group of kids and adults. It can be a fun way to get grumpy Uncle Henry and shy Aunt Mary out of the corner and into the fun with their nieces and nephews.

What Makes the Beat the Parents Game Fun?

The game is a battle royal between adults and kids. It is all the fun of a trivia game like Trivial Pursuit, but with both kids and adult questions. What is more fun than that? Especially for a kid. Do your parents know what school Harry Potter attends? You'll be surprised at how many can't answer Hogwarts. And the wild cards have you going backward and forward. The fun is in the unpredictability and challenge of it all. 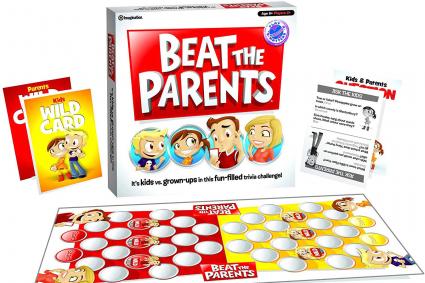 Beat The Parents Board Game

Beat the Parents comes with a board, tokens and trivia cards. After laying them out, you'll follow these rules:

Now that you are ready, it's time to get started.

Now the kids pick the card and ask the questions which the adults try to answer. For every question the adults answer correctly, the adult moves one space.

If a player or team lands on a wild card space, they select the appropriate Wild Card - either a Kids Wild Card or a Parents Wild Card - and follow the instructions on the card.

When a player or team is moving their token at the end of their turn, they can capture the first token of the opponent if they land on the same space where the token is sitting. In order to free his captured token, the token's owner would have to get his remaining token across the game board to the other player's starting position. The winner is the first one to get all their tokens across the board.

The original Beat the Parents game has been updated since its inception, with some versions adding bonus and bust tokens. Most retail for around $15 to $20. Different variations have come out over the years. Some of the older editions or variations may not be available new, in which case you'll have to buy from other sellers or second-hand. A few versions include:

The Beat the Parents Game was introduced in 2004 by Imagination Entertainment Ltd., an Australian company that also distributes games in the United States and Europe. The game was a finalist for the 2007 Toy of the Year, and it was the winner of the 2007 Creative Child Award's "Preferred Choice Award" in the Family Board Games category. It was purchased by Spin Master in 2010.

Many people find this to be a fun and exciting game that keeps their family entertained on family game night. Check out a few user responses both good and bad.

This game had an over 54% five-star rating with users noting "it was such a fun game" and "made family game night challenging." However, some users did note that it was only good for playing once or twice because you remember the cards.

Homeschool Games review of the Beat the Parents card game pointed out that the game was fun and one to their favorites. Meg Grooms also noted that it works great for bonding in a large family.

Beat the Parents trivia game makes a great game for connecting with your kids in your own home, but there are a variety of ways that you can use this game.

Take It to School

After you've had your fill at home, you might try taking this to school and make a kids against teachers challenge. It doesn't get more fun than that.

Bring It to a Family Gathering

Family picnics, holiday parties and general gatherings are a great place to play this game in teams. Not only will it create fun for everyone but there could be a winner and loser challenge given before that game starts like parents having to eat all the veggies and kids getting nothing but sweets.

Have you overused your trivia cards? Think of your own. Challenge kids and parents to create new trivia cards that they can play with. This can take the challenge of the game to a whole new level.

Parents have all the knowledge and sometimes leveling the playing field can connect a family in a way that you never imagined could be possible. Test your knowledge and let the hilarity begin with your family by trying Beat the Parents.