When you're looking for a fun and interesting activity for a grown-up get together, consider planning an evening of playing board games for adults. Playing board games is a popular pastime for many adults, for both quiet evenings and home and party activities.

Favorite Board Games for Adults

There are many board games that adults can enjoy. Some of the most popular choices are detailed below.

Described as a game of split-second charades, Guesstures players select cards that have words written on them and then try to convey the term to the other players strictly through gestures. The whole thing is timed, which adds extra excitement to the game. Players attempt to mime and guess four words in just a few seconds. The action is timed with the "mimer-timer" that is included with the game. The game gets 4.3 out of 5 stars from Amazon reviewers and is an Amazon's Choice product.

Pictionary can be great fun for family game night, as well as for a grown-ups only occasion. Board Game Geek notes that Pictionary is now considered a "classic on the party game scene." Players pull cards that have words or phrases on them and then attempt to draw pictures that represent what is on the card. The other players attempt to guess what the image represents.

Scattergories is a fast-paced thinking game that can be great fun for adults. Players roll a die that has 20 sides, each one featuring a different letter. If you roll a "G," you have to come up with a word that starts with the letter "G" for as many of the game's twelve different categories as you can within three minutes. The game is an Amazon's Choice product with an average reviewer score of 4.7 out of 5, which is impressive considering the game has over 1,400 reviews.

The Master Edition of Trivial Pursuit is great fun for the generation of grownups who love to display their trivia chops. This is a super choice for get-togethers for groups of adult friends. It's an Amazon Choice product with an average review of 4.1 out of 5 stars.

This is a popular game based on the book Around the World in 80 Days by Jules Verne. Gear Hungry calls it on their number one choice of best games for adults. The game involves building railway routes across the country and the person who builds the longest continuous track is the winner. It also gets a high rating of 9.5 out of 10 from Board Game Geek.

New York Magazine picks the Game of Thrones version of Monopoly as the best themed board game for adults. Any adult who loves the books and television show will recognize the names of familiar places replacing the traditional game board spots for Monopoly. The game cards also have a twist and involve more nefarious activities toward other players, exemplifying the political intrigue of the show. 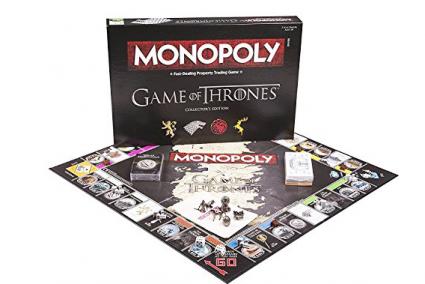 Monopoly Game of Thrones Board Game

Bustle adds the game Card Against Humanity to their list of the most popular adult board games. They note that is has received over 36,000 reviews on Amazon which speaks to the enthusiasm for the game. Cards Against Humanity describes itself as a game for "horrible people" where players must answer a series of hilarious and often crude questions.

This beautiful game features colorfully patterned Portuguese tiles which must be placed to gather duplicates while keeping other players from doing the same. Popular Mechanics noted Azul as one of its best new board games of the year. Board Game Geek also gives it a high 7.9 rating, and it's won a long list of game awards.

The party information site Play Party Plan picks Exploding Kittens as one of their top board games for adult parties. The game uses a deck of silly cards sure to amuse the players and moves quickly. The game has simple rules where players keep pulling cards until you pull the exploding kitten card and are eliminated. The winner is the last person who hasn't exploded.

Not everyone wants to play their board games with other people. If you're looking to enjoy some quiet time stretching your brain. Games Radar recommends the Fallout game. Based on the popular video game series, players move through the country after a nuclear apocalypse and gain points through quests.

Good Housekeeping included Settlers of Catan as their first choice of the best board games for adults. The game has won numerous awards and is very popular with board game enthusiasts. Board Game Quest gave it a five out of five review for its strategic gameplay, simple rules and great replay value. It also gets five out of five stars from over 200 reviews on Target. The object of the game is to settle an island through strategically trading and using resources.

Scythe has received numerous international awards and a high 8.3 rating from Board Game Geek. Players must navigate their way through an alternate history scenario with a steampunk theme. The game features beautifully designed cards that any adult will appreciate. It's not a good entry into board games for the casual player has the rules are extensive and it requires a love of strategic thinking.

This is a fun game set in a fantasy setting. The game centers around an inn where players gamble, drink and have a fun time. The winner is the last person to stay sober. Adults can drink along with the game to add some extra party fun to the gameplay. The Improb website includes Red Dragon Inn in its list to top board games for adults.

One of the most enduring and popular games of all times, Scrabble is a flexible game that can increase with complexity depending on the age range of the players. While it's a great game to teach children word skills, adults can really test the boundaries of their vocabulary knowledge. Scrabble is so popular that it's been sold in over 120 countries and is available in 29 languages.

Codenames is one of the best board games for adults according to Heavy.com. It also gets a five star rating from over 350 reviewers on Target.com. It's a great party games using three set of cards. Two teams of players follow a spy theme where they compete to find their spy agent contact.

If you're looking for a great grown-up party game, Loaded Questions may be the perfect solution. With this game, you'll have a great time finding out how well you know your friends, family, and party guests. Each player writes down answers to the same question, and the player whose turn it is gets to advance based on correctly guessing who gave each response.

Carcassonne is one of Digital Trends' picks for one of the best adult board games. The game involves placing tiles down to develop a town in a medieval setting. The game rules are relatively easy so beginning players can enjoy it right away along with experienced ones.

This is a fun game for parties that adults will love. Better Homes and Gardens includes it on their list of the best board game choices for adults. Players use a deck of 500 cards with nouns and adjectives on them. Players have to pick one of their cards that best matches a "judge" card. The more people play, the more fun Apples to Apples can be.

Telestrations is a popular party game and "After Dark" is the adults-only version. The base game is one of the most popular party games and it's on Hobby Lark's list of the best adult board games. Each player gets a small sketchbook and players need to draw as part of the game play. It's a very funny game that is a hit with parties and the larger the group the better.

Wirecutter includes Pandemic on its list of best games for adults who are just starting to get involved with board games. The theme of the game is a race to stop a global pandemic. The game involves decks of cards which can help or harm the efforts to end the epidemics. The first player to successfully end the pandemic wins. The unique difference about Pandemic compared to other board games is the focus on player cooperation rather than competition. Pandemic gets a 7.6 out of 10 rating from Board Game Geek and has also won numerous awards.

Billed the "worst game ever made" by the manufacturer, this is a very funny party card game that's made for people who enjoy offensive humor. Players are given scenarios and need to decide how their friends would handle them. It's a silly game made for parties and it's definitely a mature, adults-only game. It's an Amazon's Choice product and gets a 4.1 out of 5 star rating on Amazon from over 1,400 reviewers.

Fun With Board Games for Adults

Each of these games, along with many others, can provide hours of fun and entertainment for grown-ups. The next time you're selecting a party theme, give some thought to planning an evening of fun and board games for you and your friends. You just might start a new tradition for your social circle.