Test your power of deduction by playing CSI: The Board Game, modeled after the hit TV show CSI. Take your investigative prowess to expert level by looking at ballistics with Warrick, DNA with Greg or have Jim interrogate in this fun, entertaining whodunit CSI board game.

Understanding CSI: The Board Game

This isn't your Clue of the 1940s with Mrs. Scarlett in the library with a candlestick. Instead, CSI: The Board Game allows you to formulate theories based on deductive reasoning and cutting-edge science by visiting your favorite characters at their Crime Lab Division. The winner is the one that gets the correct motive to Grissom first.

The game is not difficult to play, but it's certainly a much more sophisticated crime solving game. CSI: The Board Game game is designed for two to four players or two to four teams of players, age 13 and older.

This game can be a lot of fun for adults and teenagers to play together. It can also take on a much larger dimension when played by adults who may have more patience to read and analyze all of the clues. It is very easy to get engrossed in the details of the crime lose track of time. For a game to take 1-2 hours is not uncommon.

The game can be set up quickly because most of the game pieces remain in inventory until they need to be distributed to a player. The game comes with:

Playing CSI: The Board Game

Players start the game by agreeing upon which of the eight crime stories included in the game they want to solve:

Players then take on the roles of crime scene investigators on Grissom's forensic team. Players take turns collecting evidence from the crime scene and from the seven crime lab divisions:

Each player reviews the crime scene descriptions and photos. They investigate and analyze the evidence in order to determine which of the three suspects committed the crime by moving up through 3 levels. The winner is the first player to enter Gil Grissom's office with an arrest warrant that correctly determines the means, motive and opportunity of a specific suspect to commit the crime being investigated.

Strategies for CSI: The Board Game

When it comes to CSI: The Board Game, you really have to get your head into crime scene mode. Winning is going to depend on sifting through the evidence and figuring out what is key. To get to Grissom with the right motive and method, try a few of these strategies:

History of CSI: The Board Game

CSI: The Board game was published in 2004 by Specialty Board Games, Inc. It is based on the Emmy Award-winning television series CSI - Crime Scene Investigation, which tells the stories of a team of Las Vegas forensic scientists led by Gil Grissom. The team investigates and solves unusual crimes.

CSI Las Vegas went on the air in 2000 and has since won many television awards. The CSI legacy grew in 2002 with the launch of the highly successful CSI: Miami. The eight murder cases in the game are written by Canadian award-winning crime writer Max Haines who has researched and written about murder mysteries since 1972. Each case is also reviewed by forensics experts.

Now that you know what the game is all about, it is time to get your hands on it. Thankfully, there are still several online and brick and mortar stores that offer this game. 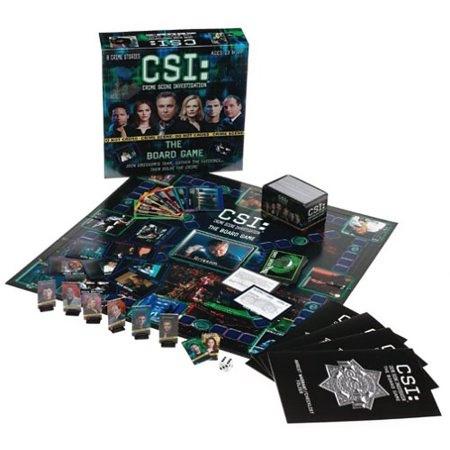 Other CSI Games and Kits

Additional versions of the game are available. You can also purchase booster packs which contain new crime stories and evidence cards. However, given the age of the game, availability new can be limited. You can try looking for these at second-hand stores and auctions like eBay.

CSI: The Board Game lets you come your favorite CSI TV characters. Walk into the imaginary crime lab and see if you can become the victor in your own real-life simulation of a crime case. Get your thinking caps on because whodunit just went to the next level.