The Candy Land board game is probably the starting point for most game players. Its bright colors, references to yummy, sugary treats and the chance to be the first at the candy castle can enthrall children as young as 36 months. Candy Land is pure fun for the little game players in everyone's lives.

Simplistic by nature, Candy Land is usually a child's first game because it requires no reading ability and only minimal counting skills. It has an easy-to-follow premise of racing through Candy Land, and it is recommended for two to four players, ages three to six. However, kids can start playing as soon as they recognize the basic colors. It does not require any reading skills, so it is ideal for non-readers, or children who don't speak English.

The Candy Land game is a simple racing board game. The game board is a linear-based track which means that you move your game piece from start to finish in a relatively forward line. 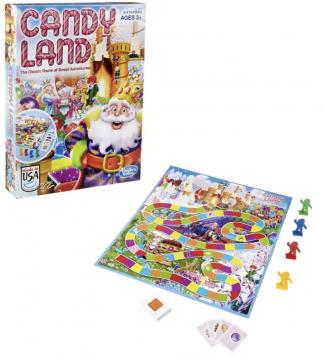 Playing the game is easy.

The fun, and frustration, really starts if a player lands on one of the three penalty spaces:

There is no optimal strategy or decision making required in Candy Land. The moves of each player are determined by the cards. It teaches the lessons of taking turns, learning rules, counting, color recognition and how to be a good winner or loser. The winner is the first player to reach the candy castle at the end of the path.

The game was designed in the 1940s by Eleanor Abbott, while she was in a San Diego hospital recovering from polio. She designed the game to capture the attention of little girls in the hospital who were also polio victims then pitched it to Milton Bradley Company. They bought the rights to the game and first published it in 1949. It was inducted into the game hall of fame in 2005.

The original Candy Land (less than $10) has made several revisions over the years and even come out with several versions. Characters like Queen Frostine (who changed to Princess Frostine) and other elements have been updated. Specialized versions have also been made; some may only be available through second-hand sellers after their initial debut, with costs ranging from $10 to $50, depending on rarity. They include:

Playing this game has been a popular family tradition for decades. You and your child are sure to love spending time playing Candy Land original or its many variations around the table!

4
Comments
© 2006-2020 LoveToKnow, Corp., except where otherwise noted. All Rights Reserved.
Resources, Advice & Tips for Covid-19
Read More
How to Play the Candy Land Board Game