First introduced in 1949, Candy Land has been played by children for generations and the characters have become iconic. As the game has gone through changes over the years some characters have changed as well, but their timelessness and overall essence remains the same.

The 1949 version of the Candy Land game did not feature characters, but they were added soon thereafter. Some Candy Land Characters evolved or changed over the years, while others were replaced entirely. Changes in the game at times reflect cultural changes and trends, and at times some characters have faced criticism for how they are depicted. The game has continued to be popular, however, with anniversary and special editions still being sold decades after its inception. There have been over a dozen versions of the original game, as well as special character-themed games, and children continue to play Candy Land today. 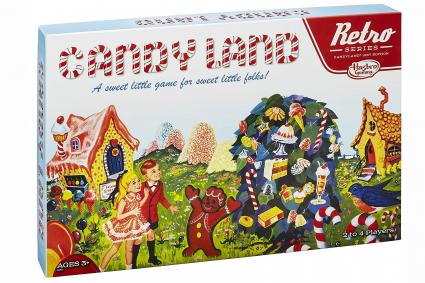 The original board game had a simple colored pawn to move across the game board. The 1962 and subsequent versions featured plastic gingerbread people to use as game pawns. Later Gingerbread Kids appeared on the board with Mamma Ginger Tree.

The images of the kids on the board evolved over the years. Early versions of the game featured a Caucasian boy and girl. Later versions added an African-American boy and a girl of Asian descent. The Kids and the Gingerbread characters were the only ones features in 1960s and 1970s versions of the game.

1980s Characters and Beyond

It was only in the 1980s game versions and later that Candy Land added a more colorful cast of characters beyond the Kids and Gingerbread pawns.

Mr. Mint is a tall fellow who lives in Peppermint Forest. He wears red and white stripes just like a candy cane. In early versions he is seen as a candy can woodcutter, but later shown wearing ice skates.

The Duke of Swirl was a character with a human face shown dressed in a Duke's outfit on the Ice Cream Slopes in the 2010 edition of the game. Mr. Mint returned in subsequent versions of the game. 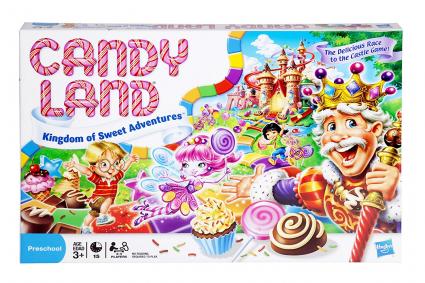 Gramma Nutt is a warm and matronly woman who lives in Peanut Acres. She also has a peanut dog, Bazz.

Gramma Gooey replaced Gramma Nutt briefly in the 2010 version of the game.

King Kandy is central to the game. It is the lost king who players are searching for in the game.

A friendly, colorful creature who lives in Gumdrop Pass. Jolly doesn't appear in later versions of the game.

Plumpy is the last of the Plumpa trolls, he is in charge of gathering the plums from the plum trees. Plumpy's character was removed in 2000s versions of the game.

Mamma Ginger Tree replaced Plumpy briefly, but was does not appear in the 2010 game editions and beyond. The 2010 version uses a location, Cupcake Commons, in Mamma Ginger's place.

Princess Lolly is a young girl whose appearance changes in various editions, but is always seen in a lollipop-covered dress. In some versions of the game she is only referred to as Lolly.

The bad guy of Candy Land, Lord Licorice tries to turn everything to licorice.

A beautiful and graceful lady seen in an icy wonderland. She loves to ice skate, and magical snowflakes follow her around. Her appearance, like Lolly's and other characters, changes with different editions. Queen Frostine was renamed Princess Frostine in 2000s versions of the game.

The 2013 Candy Land game removed and replaced several characters. It retains Mr. Mint, Lord Licorice, Princess Lolly, Princess Frostine, King Candy, and Gramma Nutt. The Gingerbread game pieces are replaced with four sweet characters: Mally Mallow, Twirly Girl, Cutie Cone, and Giggly Gumdrop. The graphics of the game board got an update for 2014, but the other characters remained the same. 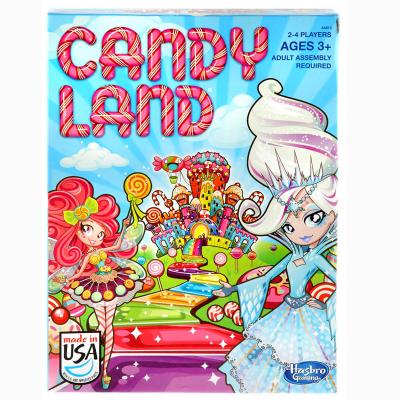 Candy Land - The Kingdom of Sweets

There are also Candy Land editions that correspond to television shows or movies. These, of course, feature the characters of the respective shows. Some special editions offered are:

Dora Candy Land features Dora the Explorer, featuring Dora, Diego, Boots, and Backpack. Benny the Bull, Isa, and Swiper the Fox on a colorful bilingual board 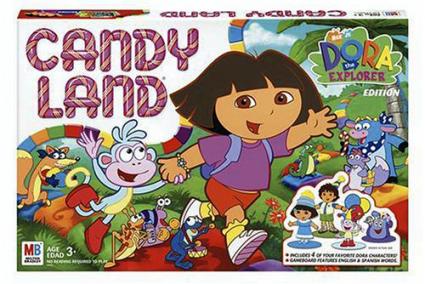 Yet another themed version is the Candy Land game from My Little Pony the Movie. The game board features Storm King, Tempest Shadow, Twilight Sparkle, Rainbow Dash, and Pinkie Pie. 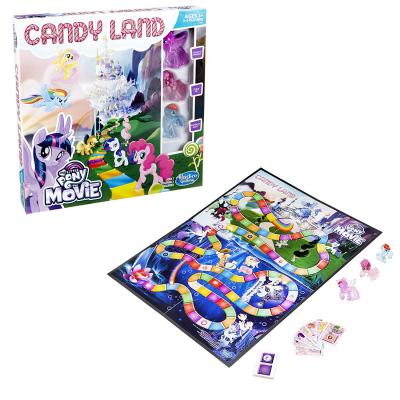 This Disney Deluxe game edition features dozens of popular Disney characters. These include classic characters like Mickey and Minnie Mouse, Donald and Daisy Duck, Goofy, and Pluto, as well as princesses like Snow White (and her seven dwarves) and Cinderella. Other featured characters include those from the Alice and Wonderland film, the Perter Pan cast of characters, main characters from The Little Mermaid, and more.

It's only natural the one of the most famed movies about candy should be depicted on a Candy Land game board. The Willy Wonka version features Willy Wonka and the Oompa Loompas.

The Candy Land Castle Game is meant for younger children such as preschoolers or toddlers. It is different from the classic game. Children use game boards shaped like gingerbread houses and race to find the Gingerbread Kids' missing decorations. They pull levers from the King's castle to get different shaped tokens and fill in their gingerbread board to win. The game is only available from third-party sellers, auction sites, or used game stores such as Don's Game Closet.

Give Kids the World

In 2006, Hasbro joined forces with Give Kids the World, a Florida resort dedicated to granting wishes and fantasy vacations to terminally ill children, to create a life-size Candy Land board. The game was also produced as a special edition board game. In addition to the traditional characters, this game also features Mayor Clayton, Ms. Merry, and other characters from Give Kids the World.

The premise of the game is a simple one: the king of Candy Land is lost! Players must move around a colorful board, counting spaces and following arrows until they find the wayward king. Since there is no reading required, children as young as three years old can easily play, but kids up to Kindergarten and first grade may still enjoy it. It is an educational game for young kids since it involves counting and logic. Only the ability to match colors and count is required, making it a game that has been beloved for years. Whether you play the classic Candy Land or one of the updated versions, kids will fall in love with the colorful, fantasy-like characters. The characters help make this classic board game a regular addition to family game night across the world.