There are some chess strategies for beginners that are useful for those who are just learning the game. Learning the game of chess is usually straightforward for everyone: learn how the pieces move; see how you win a game; and then practice by actually playing. Most often, players ignore any basic strategies and themes that have transcended the millions of games of chess played over the years. The following chess strategies for beginners work and can help you learn the game while not losing in the first ten moves each time. This article assumes you know the basic rules of chess and how the pieces move.

Whether you are the white or black pieces, there are usually two pieces that you should move first. The two center pawns should be moved forward two spaces. They can help you protect squares in the center for your other pieces and also attack the center if your opponent starts to move in on that territory. Now if you are the black pieces, you may not have an opportunity to move the center pawn that you want. There are a few openings that you can learn that will assist you in learning some chess strategies for beginners. Those are listed below. Most of the time, you will be able to match white's opening pawn move with a similar pawn move. 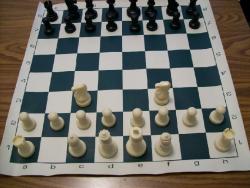 Good Spots for Knights to be early in the game.

Early in the game, it's advantageous to get your knights out quickly. Since they have limited mobility, you will want them poised to attack, defend, or take control of the center almost from the very start. Many King Pawn's openings utilize this strategy by whisking the King Knight out first with the Queen Knight following soon. Once the two middle pawns are moved up, the Bishops have long diagonals to work onto, so they can wait a little bit before journeying off their home square. Unless you absolutely have to, you do not want to move your knights onto an edge square: they then only have three squares to go to, which lessens the value of your Knight greatly.

Working to get your King castled is a strategy in itself. You have two possible ways to castle: Kingside and Queenside. Keep these two things in mind: 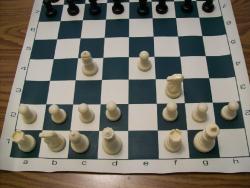 So which side is the best? For most, it's the Kingside because most openings will have players castling that way. Of course, it all depends on your playing style. If you are an aggressive player, then castling opposite your opponent often leads to sweeping attacks on either side of the board. Passive players may want to castle the same side for the wait-and-see game until a good attacking line can be seen.

Keeping Your Queen Back, At Least for a Little While

The Queen is the most powerful piece on the board since it can attack and defend in all directions. It's natural for a beginning player to want to get that piece out immediately and start attacking, but one piece cannot win the game alone. Anyone who's played chess even for a little bit can see that you are a true beginner if you are reliant on your Queen early on. An early-attacking Queen can easily be defended. The Queen needs backup, and developing your pieces first is the only surefire way to have a solid opening, an efficient middlegame, and, if needed, a winning endgame.

Some openings, like the Center Game, push the Queen out of the home square as often as the third move. If you are going to play this type of opening, make sure you know the theory and the strategy behind the moves and how to combat lines that aren't followed.

Moving from the technical aspect of chess strategies for beginners is a mental strategy. If you are a beginner, then you might be prone to frustration, stress, and irritation at your own folly. Learn from your mistakes, but be patient. You will escape that beginner status in no time.