You have a choice of two moves to use at the start of a game of Chinese checkers for the highest chance to win.

Both of these are strong opening moves, as they set you up for a route across the board. The goal is to bring the pieces closer to the center line.

How to Win at Chinese Checkers

There are a few basic rules that people who are using a winning strategy for Chinese checkers follow. These strategies will work regardless of the number of players.

Aim for the Center Line

When you're working through the middle of the board, you will find it easier and faster to get your pieces where they want to go.

See the Whole Board

Always look at the whole board before you make your move. Don't strand one of your pieces at the back of your section of the board because you got in too much of a hurry to get your first pieces in position. Also watch what your opponent is doing to make sure they don't block you in a future move. 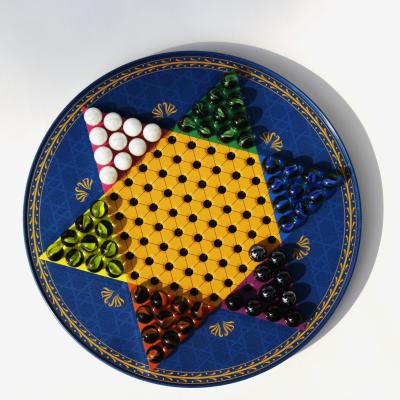 Move From the Sides In

Once you start filling in your final destination, get them in position along the sides of the triangle. This seems to make it a little easier to feed the pieces in than if you worked, say, from back to front.

Remember that just because you can keep jumping over marbles doesn't mean you should always go as far as you can travel. Sometimes more of an advantage can be gained by blocking an opponent than by filling in your goal area. Another blocking strategy is to leave one marble in the other players ending area, as this makes it impossible for them to fill the area and win. Again, it's all about thinking strategically.

Keep Your Marbles Together

It's best to keep your marbles close together so they form a line pointing from the beginning to the ending area. You do not want them directly next to each other however as having a space between each allows you to jump your marbles along a farther distance. If marbles are too far apart and cannot jump, this will delay your ability to fill up the final destination first.

Always be aware of where your last marbles to move are in relation to the others. Moving your other marbles too quickly away will "strand" a marble in the starting area and they won't be able to move.

Chinese checkers is a lot of fun and involves slightly different strategies depending on the number of players and what your objective is. But once you understand the basic opening moves and techniques for success, you'll become a champion Chinese checkers player in no time.