The Clue board game has been a favorite for more than half a century. If you've never had the opportunity to solve the murder mysteries of the classic Clue board game, it's easy to learn how to play Clue. So pull out that board and get ready to have a fun time discovering if the murderer was Mr. Green in the billiard room with a wrench, Scarlet in the study with a knife, or Mrs. Peacock in the library with a lead pipe.

The Object of Classic Clue

As guests of the Tudor mansion the Clue characters find themselves suddenly suspects and investigators in the untimely death of their host, Mr. John Boddy. Players must correctly determine the killer, the room where the murder took place, and the weapon that was used in the crime to win the game. Because of these three variables which change with every game, there are numerous possible combinations that help make the game interesting and challenging each time you play.

Who Can Play Classic Clue?

The classic version of Clue is designed to be fun for most ages, with a minimum cut-off of eight or older for children. It may also be suitable for younger children if they play on teams with older kids or parents. It's best played with between three and six players. The more players, the more difficult the game will be although it also makes for a more fun game.

How Long Is a Game of Classic Clue?

The average time for a game of Classic Clue is between a half hour to an hour. The fewer players you have, the shorter the game time will be.

Clue is known for its iconic game board, character pieces, and miniature weapons. Familiarizing yourself with these aspects of the game will make playing easier, and it will also put you ahead of the game, so to speak. While newer versions of Clue have come along over the years, these elements and instructions for the classic version are still popular today.

The Classic Clue Game Board

The game board represents the layout of a mansion and features nine different rooms:

Characters travel between the rooms by rolling the dice and moving from floor tile to floor tile to reach the doorway. Secret passages also allow players to move from one room to another or move around the board more quickly. 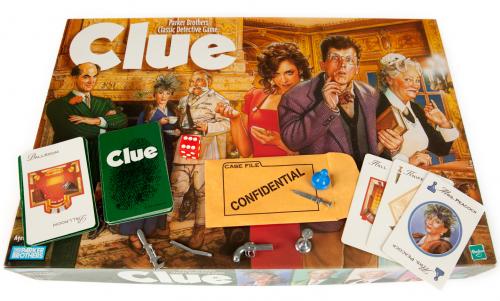 There are six different characters in the game, each of which is associated with a piece. Clue's character pieces look like traditional board game pieces, but the piece colors represent each character:

The game of Clue features miniature versions of six different weapons. The weapons include:

Included with the game are cards to represent each character, weapon, and room in the mansion. At the beginning of each game, one of each type of card is randomly selected and placed in a confidential case file without being seen by any of the players. These cards represent the murderer, the location of the crime, and the weapon used to commit the deed.

In addition to the main components, the game contains the following items needed to play the game:

Setting Up the Classic Clue Board Game

The board represents the home of Mr. Boddy. All players have a designated place on the board for where the characters' playing pieces start. Follow these simple steps to set up the game:

After all the pieces are set up, the players take turns. Playing Clue involves deductive reasoning as all players try to figure out who murdered Mr. Boddy, in which room, and with what weapon. 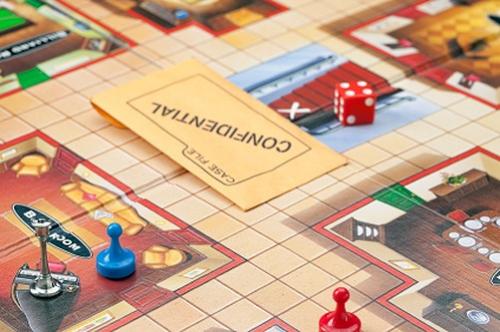 The object overall of Classic Clue is to have fun with this murder-mystery adventure game and enjoy your friend's and family's company. However, if you are driven to win, your focus should be on gathering information and making smart moves.

Take Note of the Facts

All Clue games come with a detective notebook sheet pad, but, if you're playing with an older game, they likely ran out a long time ago. If you don't have those detective sheets on hand, don't worry. Simply have a pen or pencil and a scrap of paper with you when playing. Taking notes can help you keep track of the cards you've seen and the clues you've discovered. You can also download new printable Clue tracking sheets.

When you think you know the answers to win the game, you may still lose if you can't get your piece into the room where you think the "murder" took place. So it follows that you need to get to that room in as few moves as possible. Be aware of the secret passages between the conservatory and the lounge as well as the secret passageway between the study and the kitchen.

Also, some other aspects of the board may help you at different times during the game. There are only six squares between the conservatory room's entryway and Mrs. Peacock's starting position, for example.

Put On Your Poker Face

When you enter a room, try to make an accusation using two or three of the cards that you have in your hand. When you use all three cards in your accusation, you will throw everyone for a loop since none of the other players can disprove these suspicions. As you continue with the game, the next time you make an accusation, be sure to try something else entirely, drawing attention away from your first accusation.

Clue isn't a game that lends itself well to teamwork. No matter how few clues you possess, they should remain a secret until the end of the game. Keep the information that you deduce to yourself. Sharing information will only up the odds that you'll lose the game.

Play Clue With Your Family

The Clue board game makes a great addition to any game collection and is a perfect choice for family game night. The Huffington Post named Clue as the best game from childhood, so get in on the fun and give the game a try.

0
Comments
© 2006-2021 LoveToKnow, Corp., except where otherwise noted. All Rights Reserved.
Resources, Advice & Tips for Covid-19
Read More
How to Play the Classic Clue Board Game