Created in the late nineteenth century, crokinole is a fast-paced dexterity board game that combines elements of classic games such as shuffleboard, curling, and marbles. The game is easy to learn, fun to master, and sure to provide hours of entertainment for players of all ages.

Players use their fingers, or small cues, to flick wooden discs toward a hole in the center of the crokinole board. With each successive shot, players attempt to knock their opponent's discs off the board or into rings worth fewer points, while working to maneuver their own pieces toward the center hole which offers the most points.

The game requires a crokinole board and small colored discs or rings. The boards are circular, usually 26 inches in diameter, and commonly made of wood though they can be created from any smooth material including plastic or marble. The crokinole board features a series of scoring rings, as well as a center hole surrounded by posts or pegs that serve as bumpers, making shots to the center hole more difficult.

The board's outermost ring is the shooting line. Most crokinole boards also feature an outer edge, called a ditch, that catches the pieces knocked off the board during the round.

Each player starts with 12 discs in a standard, two-person game. For four players, divide into teams of two and give each player six discs. 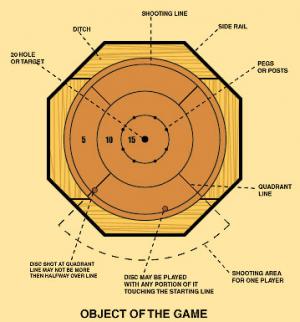 Similar to shuffleboard in its basic game play and objective, crokinole's rules are simple, straightforward, and can be learned in just minutes.

Carom shots, in which a player bounces his disc off a peg or other discs, are allowed in crokinole. When making a carom shot, also known as a combination shot, the following rules apply:

Once all the pieces have been played, the round ends and points are tallied. Successful shots to the center hole are worth 20 points while the point values for other shots are determined by where they land in relation to the board's scoring rings. The area from the edge of the center hole to the peg bumpers is worth 15 points, the next ring is worth 10 points and the outer ring is worth five points. Discs that touch the scoring lines between rings are scored at the lower point value.

The first person or team to reach a cumulative score of 100 is the winner, though you can also set a different, pre-arranged score that must be reached in order to win.

Crokinole isn't just for casual play. The National Crokinole Association, an organization dedicated to fostering the formation of crokinole clubs around the world, organizes a series of tournaments each year known as the NCA Tour. The rules for tournament play are a bit more stringent than the rules used during a casual match between friends. Tournament rule variations include:

A large part of the strategy in crokinole is perfecting your aim and regulating the amount of force used to push the discs. Getting a feel for the game board can also help your efforts. How much friction does the surface provide? Are there any rough spots or other irregularities? Small variations from board to board can threaten to throw you off your game but, if you've mastered your aim and shooting force, you'll quicky find ways to use them to your advantage.

While many crokinole purists revile the use of player aids such as finger cues and lubricating powders, other players wouldn't even attempt a game without their trusty cue or powder at their side.

Eyes on the Prize

In many ways, crokinole is as much about speed and aplomb as it is technique. Take bad rounds in stride and don't let them shake your confidence. If another player pulls ahead with some great shots into the center hole, stay calm and focus on closing the gap in the overall score. Most importantly, remember to have a great time. 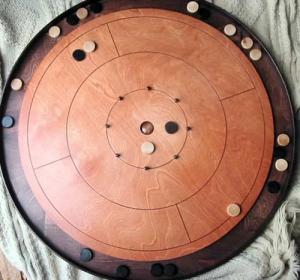 Crokinole Board from Crokinole World

While prefabricated crokinole games will do the trick for family game night, many diehard crokinole enthusiasts swear by their custom boards. Adventurous do-it-yourselfers can even try their hand at making their very own crokinole board and pieces.

Fun for the Whole Family

Classic games like crokinole can bring the entire family together for hours of fun. Once you've introduced your family to crokinole, don't be surprised if they beg to play "just one more game" again and again.

0
Comments
© 2006-2020 LoveToKnow, Corp., except where otherwise noted. All Rights Reserved.
Resources, Advice & Tips for Covid-19
Read More
How to Play the Crokinole Board Game