Dread Pirate rules are very easy to understand, making this a fun family board game that also helps develop counting and strategy based skills. Parents and kids age eight and older can enjoy becoming pirate ship captains who trade, attack and plunder to build their fortunes of jewels and doubloons in this family friendly board game.

Dread Pirate is a board game aimed at kids who can read and strategize, but can be played with adults for a family game night. The game can be played with two players and up to four can participate. The more players you have, the more exciting the game typically is. It takes about an hour to play through with the goal of finding the most treasure. Twists and turns occur when players have to take a "fate" card, and battles can break out between players for loot. Once all the treasure is found and removed from each home port, the game is over and each player will count up their treasure to see who has won.

The Dread Pirate playing area is set up by placing the games pieces on the cloth playing board which is designed as a playing map. The individual game pieces typically include: 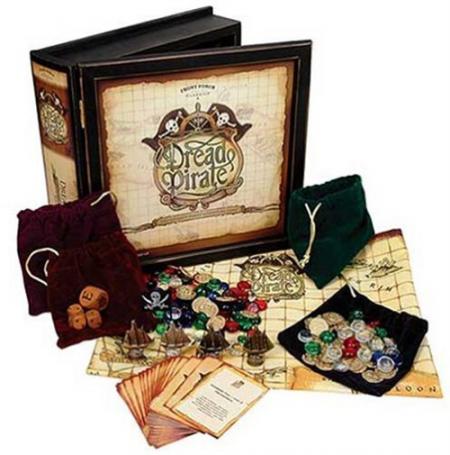 Each pirate player is the captain of a pirate ship that moves around the game board playing map. The actual amount of movement is based on the player's dice roll. The game ends when all the jewels from the home ports have been claimed. The pirate player with the most treasure at the end of the game is the winner.

Getting Started With the Game

Each pirate player rolls one die. The player with the highest roll starts the game. The turns pass to the left.

Skirmishes are little battles that break out amongst players for loot. During a skirmish:

Trading gives you a chance to increase your jewels. To trade:

Dread Island can be seen at the center of the board. In order to get there:

Although winning this game is based heavily on luck and how well you roll the dice, there are a few things you can do to up your chances of winning Dread Pirate. Because the game ends when all the ports have been raided, think about when and where you will attack, as well as where to search for treasure. If there are plenty of ports left with treasure, it may be a good idea to avoid skirmishes and creating rivals. If you leave skirmishes for the end of the game, you'll have a smaller chance of getting attacked by others, thus having a higher chance of maintaining your loot.

Dread Pirate can be purchased used through eBay or Amazon for around $30 to $100, depending on the edition selected. A new game can cost over $100. There have been a few versions of Dread Pirate released throughout the years. These include:

Dread Pirate is a great game for using counting skills. It appeals to a wide variety of players and their abilities, so pick up a version and start searching for treasure.