Chess is one of the oldest games that a person can play these days, and getting the upper hand against your opponents can begin with knowing several famous opening chess moves.

The Game of Kings

This game is a way to train your mind to think in very analytical ways. You learn how to look at the field of battle and discern possible movements in order to take your opponent's men and then to take the king to win the game. The game takes under a minute to setup, hours to play (potentially) and a lifetime to master.

The Importance of Opening Chess Moves

There may be no move in chess as important as the opening move. The opening move refers to the first initial move a player makes on his or her first turn. Playing white gives you an initial advantage, and playing black immediately puts you on defense. There are several things a player aims to achieve while performing his or her opening moves:

As you begin your opening moves, you can also set yourself up for your middle game strategy.

Learning about famousopening chess moves as a beginner can certainly give you an upper hand in your game play. Essentially, there are three types of openings or "opening groups":

The following diagram explains the letter and number calling used on the chessboard: 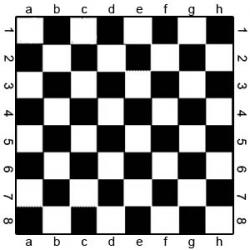 This opening allows White to put pressure on Black's e-pawn while attempting to get ready for a pawn on d4. Black's best defense is to move to a6 on the 3rd move to attack White's bishop. When this is done, White can back up or exchange pieces.

This opening is known as the "Quiet Game" and can have several variations. In this opening White mildly attacks with the bishop, but Black can quickly even the odds. The opening begins as such:

If White responds with d3 then the opening is changed to the "Quietest game" which can be played very passively. If White were to respond with b4 you will create the "Evan's Gambit" opening where he offers a pawn in exchange for a strong central position and most likely opening up the queen's bishop.

With this opening strategy White will sacrifice a pawn in order to achieve rapid development and was popular in the 1800s but is not seen much today. Black can create a good position without giving a thing for White's pawn.

The most natural choice for a next move is exf4 thusly accepting the gambit.

This is a very popular move at master chess level where Black goes right for the jugular to fight for the center but attacks from the c-file instead of simply mirroring White's movements. This defense will lead to complicated maneuvers. This begins with:

Normally Black with go after White's e-pawn by using his knight at f6 and the bishop at b7 because Black wants to be able to take d5 without an immediate attack.

The "Dragon" is a variation of this opening:

With this Black finachettos a bishop on the diagonal at h8-a1 created a pawn structure that resembles a dragon. Another variant, Najdorf, begins like the dragon but changes on Black's 5th move:

White will often respond with Be2 which allows Black to take the center using e5.

In this move Black allows White to control the center as he builds a wall of pawns.

Many games will find you competing for a good position. Here White will usually respond with e5, Black with c5 or f6 king Black's queen bishop useless and trapped.

This opening begins with:

This opening begins with something other than e4 on the first turn: