Playing the Jeopardy Board Game

Jeopardy can be played with three to five players, but you can also team up if you're with more people for some added fun. The game takes around 45 minutes to an hour to play through. The winner of the game is the player who has the most money at the end. Keep in mind winning not only depends on how well you answer questions, but how strategically you wager. The original Jeopardy board game costs around $18 and several versions can be purchased.

What's Included With the Jeopardy Board Game 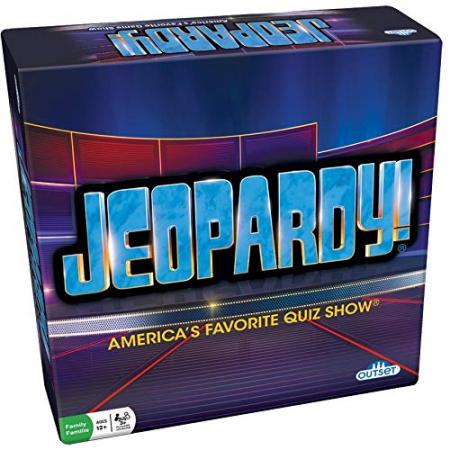 Rules for the Jeopardy Board Game

Once the game board is set up and the clickers are distributed, pick one person to be the host of the game. The host will read the corresponding answers to the category and dollar amount selected by the player. For older game versions, the host will then hide the double jeopardy cards randomly behind the card stands so the players can't see them. Once the game starts:

How to Win the Jeopardy Board Game

The player who ends up with the most money at the end of the board game wins. Besides getting the most questions correct, you can also:

There are around 30 Jeopardy board game variations that vary in price depending on availability. Some versions include:

The Rise of Jeopardy's Popularity

Jeopardy is America's original television trivia game. The show first aired in 1964 on NBC with Art Fleming as the host. The name was chosen because the contestant could win or lose money with each question, so their money was always in "jeopardy." The current Jeopardy format came to CBS in 1984 and remains in syndication with Alex Trebek as the host. Jeopardy ranks as one of the top-rated syndicated shows so it's no wonder why so many viewers want to play the board game at home.

Have Fun Playing the Jeopardy Board Game

The Jeopardy board game is the perfect game to play on family game night, at a birthday party, or during events with friends and family. This educational game is super fun to play and is an awesome option for anyone who enjoys a little friendly competition.

3
Comments
© 2006-2020 LoveToKnow, Corp., except where otherwise noted. All Rights Reserved.
Resources, Advice & Tips for Covid-19
Read More
Guide to the Jeopardy Board Game