The Jumanji board game is a fun and challenging game based on the book and subsequent movie starring Robin Williams. With twists and turns, and action packed excitement, this the perfect board game to play with friends and family members.

Understanding The Jumanji Board Game

This game was created for those eight and older and can be played with two to four players. Play time takes around 45 minutes to an hour to complete the game. In order to win, players must escape the jungle and make it to the center of the board by solving riddles, rescuing each other, and using their wits to outrun lurking dangers. 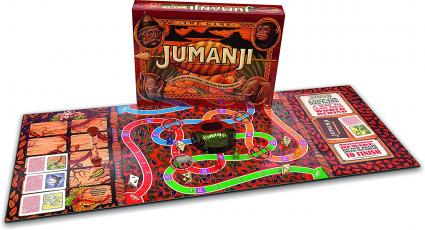 Jumanji is a fun board game to play during a family game night or at a party with friends and only costs around $15 to purchase. To play:

In the box you get the following:

How to Play Jumanji

Jumanji requires some teamwork, despite their being only one true winner in the end. The majority of the game is up to chance and will depend on how lucky you are when you roll your die. The object of the game is to avoid being trapped or taken down by the jungle and to reach the center of the board. To win the game:

Since its release in 1995, there have been several other versions that have come out. These include:

Having Fun Playing the Jumanji Board Game

The Jumanji board game is a fun and exciting game to play with friends or family members. With so many variations in how the game will unfold, you'll have a great time playing again and again.

Comments
© 2006-2021 LoveToKnow, Corp., except where otherwise noted. All Rights Reserved.
Learning the Jumanji Board Game Rules for a Wild Time