In 2008, nearly 60 years after the popular board game Clue hit shelves, Hasbro decided to give it a makeover. By moving the game of Clue from a traditional mansion to a more modern party house, the makers of Clue have brought the classic game into the 21st century. Add this new updated version of Clue to the rotation during your next family game night.

Components of the New Clue Game

In the new Clue you will not find the all of the same places as the old game. The mansion has received a makeover to become a hip party spot. Gone are the library, billiard room and conservatory. The new game includes the kitchen, dining room and hall from the old game and new rooms, including:

In addition to the different rooms, the characters start from different places on the board. By choosing one character over another, you may be able to get into a room faster.

This new Clue board game also has a new roster of playable characters with familiar last names. All characters now have first names, occupations and new images. They include: 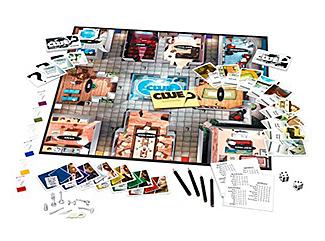 Gone are the lead pipe and wrench from the original game, though some of the weapons have remained. Instead of six weapons, there are now nine including:

Like in the original game, players are dealt cards that feature the weapons, characters and rooms in the mansion. They use these cards to discover the crime that was committed. A new addition to the game is the pool in the middle of the game board. A special room in the mansion, it contains any undealt cards. Players may enter the pool to look at the cards and cross out suspects.

Also included in the game are "intrigue cards." When you land on a spot with a question mark, you draw an intrigue card, which may give you a special advantage in the game

The game pieces and notepads take on a different look in the new clue as well. Instead of moving colored pawns, you move clear question marks with colored bases. The notepad is designed to look like a dinner napkin and contains space for marking down your notes.

Even though the new Clue looks a lot different, the rules of play are similar to the classic version.

Where to Find the Game

You can find the new version of Clue at most toy shops or department stores, online or in person. Check out Amazon, or if you have trouble finding it, Hasbro offers a search tool to help you find retailers of the game near you.

Update your game collection to include the new Clue. The method play is similar to the classic game and the new intrigue cards and different rooms in the mansion add intensity and freshness. Fans of the classic game will enjoy this new take, while younger players will get hooked on the modern components.

0
Comments
© 2006-2020 LoveToKnow, Corp., except where otherwise noted. All Rights Reserved.
Resources, Advice & Tips for Covid-19
Read More
How the New Clue Board Game Differs from the Classic