The Payday board game, more commonly known as the Pay Day board game, has been around for more than 30 years, entertaining both kids and adults with its fun object of earning the most play money by the end of the game.

About the Payday Board Game

Pay Day was created by Parker Brothers in 1975. It was designed by one of the most popular game designers of the era, and even outsold Monopoly, which is played in a similar manner, during its first year of production. 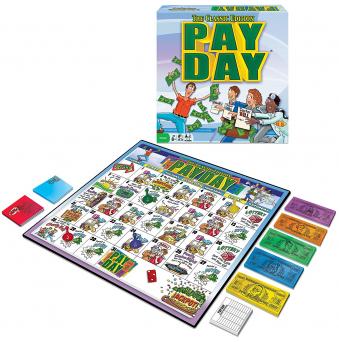 To win Pay Day, a player must have more money than the other players by the end of the game. The board is divided up into different calendar months, usually totaling three or six months depending upon the number of players. However, any number of months can be played.

Each player starts with $325 in play money, and then the first player rolls the dice. A player's piece then moves the amount of spaces specified on the dice. On whatever space the piece lands on, the directions written on the calendar space tell what to do next. There are 31 days in each Pay Day month, totaling an average between 93 and 186 spaces for a three or six month game board.

If a playing piece lands on a "deal" space, then a player draws a card from the deal deck. He can then purchase the deal listed on the card or else pass up the opportunity and return the card to the bottom of the deck. If the player wants to purchase but doesn't have enough money, he can take out a loan. He can also win commissions off of the deal cards and spaces.

If a player lands on the "mail" space, he draws a mail card off of its deck. These contain various pieces of fortune or misfortune, such as bills, money prizes, or just plain junk mail. There are also faux lottery tickets that can be used to cash in if someone is on the correct space in the appropriate month for that card.

While the Pay Day board game may rival the more prolific Monopoly, there are a few features to it that make it more complex and memorable.

If a player lands on "Daylight Savings", then he needs to move his playing piece backward one space and follow the instructions on that space like a regular turn. If a player happens to be on the start space when this happens, then he is in luck - he gets another $325 for his time.

Each player places $100 on the board, and then each takes a turn rolling the dice. Whoever rolls the highest amount receives all of the money collected.

During a town election, all players must pay a fee. If they do not have enough cash on hand to cover it, then they need to withdraw from their savings or take out a new or further loan. When the next player rolls a 6, then he wins all of the money put in for the town election.

Unlike any other space on the board that comes with reward or punishment, Sweet Sundays are "rest" spaces, where there are no penalties or advancements.

Quite arguably one of the most important spaces on the board, the namesake of the board game comes from these in which a player may do the following:

The success of Pay Day led to a slight revamp in the mid 1990s. The revised rules are available online, and either rules of play can be used today. Purchase Pay Day at your local toy or game store next time you're looking for a way to pass a lazy afternoon.