If you are the parent or teacher of a new or reluctant reader, consider adding a phonics board game to your teaching arsenal. Research shows that kids learn best when both their hands and heads are stimulated, and board games fit the bill on both counts. Besides, board games are so fun that kids won't even know they're learning!

Phonics Board Games for Preschoolers

Most preschoolers just aren't ready to read, and it's important not to put too much pressure on them during this time. However, many are interested in books and reading. At this age, a lot of kids are starting to understand that letters have names and sounds associated with them, so most phonics board games for the preschool set focus only on those topics.

If your youngster is expressing an interest in words, letters, and pre-reading, the following games might be appropriate: 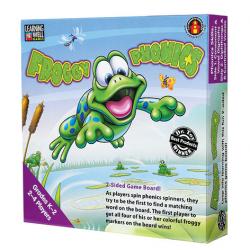 For most kids, early elementary school is the ideal time to begin teaching reading. Kids at this age are better able to grasp the concept that letters represent spoken sounds. What's more, kids of five and up are also better able to understand the rules of board games! 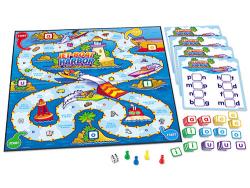 Using a boat to race around the board, Jet-Boat Harbor: Short Vowels Game is designed for first to third graders and can be played by two to four people. The object of the game of to build all the words on the player's card. Words are built by drawing tiles with short vowels on the their turn. As the name suggests, the game concentrates on short vowel sounds.

Just like Jet-Boat Harbor, this game is designed for first to third graders. However, this game focuses on a different aspect of phonics: consonants, digraphs and blends in addition to short vowel sounds. In Wheel of Phonics, players build words by connecting letters and digraphs on the game pieces. The player who completes the most words wins. The game builds phonic recognition, spelling, and word-building skills. 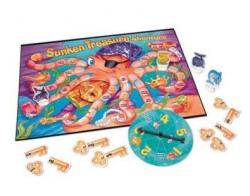 Sunken Treasure Adventure Phonics Beginning Blends is designed for kids ages six to 10 who already have a solid grasp on individual letters and sounds. This game focuses on blending two consonants to make one sound. Some examples of consonant blends include br, bl, gr, sp, and tr.

In the game, kids search for hidden treasure by following the path of an octopus. Players spin a spinner, count moves, and collect word part cards. They combine the beginning blend cards with word ending cards to make real words. The player with the most words wins! 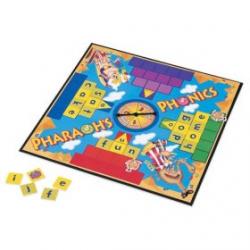 Pharoah's Phonics is an educational board game by Learning Resources. The game, intended for kids ages seven and up, is a multi-level phonics game appropriate for a variety of skill levels. Skills reinforced include the following:

In this fun game for two to four players, kids not only build words; they also build the pyramids of Egypt! The first player to complete his pyramid wins the game.

As its name suggests, Python Path Word-Ending Game focuses on word endings. The board consists of a large python with letters scattered along the path. Players use their animal game pieces to move along the python to his tail. They roll special word-ending dice along the way. The goal is to combine the rolled word endings with the letters on the board to make real words. The player with the most words wins. This award-winning game is recommended for new readers ages six and up.

Another excellent learning game by Learning Resources, Creepy Cave focuses on consonant recognition. This game is designed for younger pre-readers. Kids use baby monster play pieces to make their way to the big monster in the cave. They must roll dice and look for matching consonants along the way. The game reinforces the following skills:

Designed for kindergarten to third grade, Spelligator focuses on the building blocks of phonics: consonants, vowels, digraphs, and blends. Players learn letter patterns and letter positioning as they build words on the backs of their alligators. The player who creates the most words wins. The game, which includes a word list, can be played by up to four contestants.

Since understanding phonics requires multiple skills, it may be wise to purchase several games to encompass what your child needs to learn. Of course, if they are struggling with a specific phonic issue, like digraphs, buy a game that focuses on that concept. Besides board games, you can try other phonics activities, including free printable games, to help your child master phonics and reading.

Comments
© 2006-2021 LoveToKnow, Corp., except where otherwise noted. All Rights Reserved.
11 Phonics Board Games That Make a Fun Learning Tool