If you are looking for a family game of hide and seek that you can play around the table, then Pictureka! is your game. Enjoy this award-winning Belgian board game with your friends or family.

The game was designed in 2006 by Belgian game designer Arne Lauwers, who has been designing games since 2002. His company, Lauwers Games, licensed Pictureka! to Hasbro, which is now publishing this wildly popular game.

Many people noted this game was a great to play with younger children, but some adults and older children may get bored playing. Board Game Geek compiled around 732 user ratings of the game, and Pictureka scored a middle of the road 5.4. Wired noted that they really enjoyed the game, and the only issue they had with it was the difficulty with card storage they encountered.

The game encourages the players to be observant and keep thinking. Players have to quickly scan small pictures across the board looking for a specific picture. Even non-playing spectators of all ages will enjoy the excitement of the game as players challenge each other to find objects on the game board. The game is equally fun for two younger players as it is for nine players.

Hasbro recommends the game for kids as young as six and adults of all ages. The hide and seek aspect of the game makes it fun for the younger players, while the older players may enjoy the competitive nature of the game. This broad range of players' ages makes this a great game for a family gathering or a game party.

This is a very easy game to learn and set up. There are not a lot of instructions or game pieces. You can unpack the game and be up and playing in less than five minutes. 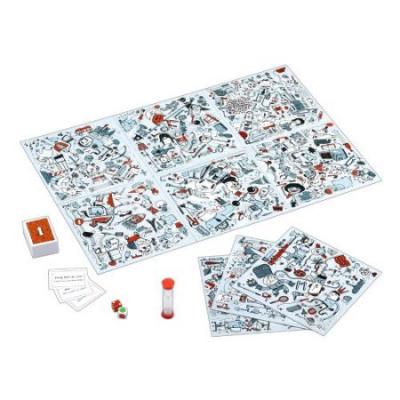 One player is chosen to go first and starts the game by rolling the colored die. Each card color will correspond with a different type of task. In all the games, you are up against the timer and the other players so you must work quickly.

If You Roll Blue

Your task is to find a specific image.

If You Roll Red

Your goal is to find as many objects as you can that fit in a certain category.

If You Roll Green

Your goals is to find as many objects as you rolled on the die that fit in a certain category.

The game should be kept away from children due to potential choking hazards. The game contains a marble, a small ball and other small parts that can be a choking hazard to children under three years old. Children under eight years old can choke on the balloons contained in the game. Broken balloons should be discarded and children should be closely supervised while the game is being played.

Pictureka is available to purchase online as well as at toy stores.