Uno is a card game beloved by fans of all ages, and today there are many options to choose from to play the game. If you are looking for places to play multiplayer Uno online, you won't be disappointed with this collection of games, apps, and websites.

The official Uno game from Ubisoft is available for Playstation 4, XBox One, and PC for $9.99. Online multiplayer is a standard option with the current game, allowing you to interact with friends or other players worldwide. You can chat with other players use Voice Support, or enable video chat so you can see friends face to face. Other features such as leaderboards and virtual medals encourage user competition and interaction. You can play with standard Uno rules or sey up your own "house rules" when you play with others. There is a limited free trial available.

You can also get the PC version of Uno available via digital download. It requires a 64-bit operating system and is compatible with Windows 7, Windows 8.1, or Windows 10. You'll also need 4 GB Ram and NVIDIA GeForce GTS 450 or AMD Radeoan HD 5670 graphics card (or equivalent). A broadband internet connection is required to access the multiplayer features.

Uno is available for Playstation 4, though you must have a Playstation account enabled in order to use the interactive features to play online with other people. When you purchase the PS4 version, you'll also get access to a free Playlink that will allow you to play the game on mobile devices.

The XBox One version of Uno requires an X Box Live Gold account (sold separately) in order to access online play with others and the social and interactive features of the game.

Another option to play the official Uno game with friends or other players is with the Uno Live! app from Mattel. The app is free to download and use on a mobile device, but you'll need a wireless data plan or WiFi connection to play. The app allows you to play online with friends, and you can even set up private rooms and set your own house rules. A unique feature he app offers is that you can also team up with friends to play partner Uno games against others. Other features include tournaments and leaderboards.

If you're a fan of connecting with others and playing games on Facebook, you can play Uno via Facebook Messenger and play live with other players or friends. This is the classic version of the game, and is available worldwide. You'll need an active Facebook account and internet connection in order to play.

Uno With Buddies is a game by Digital Attitude Games that is available for PC or XBox One. If you play via PC, you'll need Windows 10 or higher and a 64-bit system. The game is free to download, but you'll need a Mircosoft account in order to get it. An internet connection is also required. There are two, three, and four player modes and classic Uno rules. You can play with others around the globe, create a private room and invite friends to play, or play against AI computer players.

In addition to the above options, there are also several websites online to play Uno with other people.

Play-Uno.com is a unique way to play the game because it offers a wide range of options for play via AI player. You can either register for a free account or play without anonymously, though you won't be able to be eligible for the leaderboard if you don't enter. You can play with anywhere from five to nine adversaries and with options for seven through 11 cards. You can also choose from five game speeds, ranging from Very Slow to Very Fast. You'll just need an internet connection to play.

Uno Freak also allows you to either register for a free account or play as a guest, although like Play-Uno.com, you aren't eligible for placement on a leaderboard unless you have an account. On Uno Freak, you can enter virtual rooms and either play live against others or play against AI players. In addition the leaderboards and stat features, there is also a messenger feature. You only earn points from playing against other live players, not bots. You can play directly in your browser, so you just need access to the internet.

Crazy Games offers options or play Uno either with an online multiplayer mode or against computer players. You can play with up to four random opponents. Turns are timed during play, so if your run out of time, you'll lose your turn. You can also choose a fun profile pic. There are no downloads or specific platforms required, so you can play anywhere you have an internet connection. 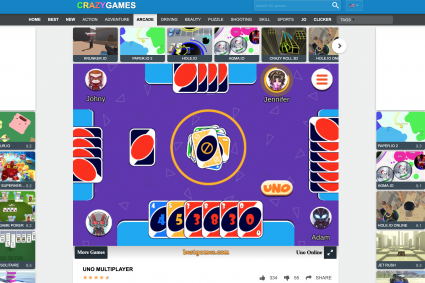 Another option is 4 Colors on Poki Games. You play against two, three, or four computer-generated opponents. It has a simple, easy-to-use format with simple rule explanations shown at the start of the game. There are no timed turns, so it's fun option if you need something to do in between other tasks. Sound is optional. The game only requires an internet connection.

If you're looking for a fun themed option to play multiplayer Uno online, you may want to check out the Halloween Uno Multiplayer game from Best Games. The Halloween game is free to play, but it will feature ads before allowing you to start playing the game. To start, you'll enter a player name and choose a fun Halloween profile picture. Then, choose whether to play an online multiplayer version of the game, or against computer players. Play against two, three, or four other players. Turns are timed. Like the other web games mentioned, it just requires an internet connection.

Have Fun With MultiPlayer Uno

If you love the game of Uno, you have lots of modern options to interact with other players and friends. Uno is fun for everyone. Whether you are a woman looking for a fun online game or a kid looking fora new online game, explore the different options to challenge yourself and have fun!