Puerto Rico is a German strategy game published in 2002. It is available in German and English, and portrays the colonization of the island of Puerto Rico by Europeans. While serving as colonial governors, players are responsible for shipping goods, constructing factories and other buildings, and growing crops.

The game is for three to five players of ages 12 and up and requires a lot of observation and thought. A shorter, two-player version of the game is also available.

Puerto Rico is a "role choosing" game. During each round of the game, players take turns choosing actions. When a player chooses an action (buying a new building, for example), every player in the game gets to do that action. However, the player who chose the action gets a better version of that action. The strategy of the game is in choosing the actions that help you the most and your opponents the least.

Where to Buy the Game

This game is available at many hobby game stores and some major toy retailers. It can also be purchased online at Amazon (see image) and Walmart. 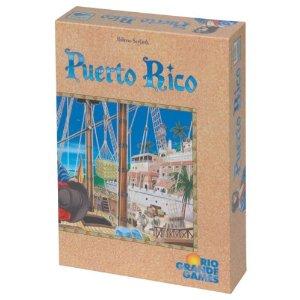 Pick up Puerto Rico at Amazon.com

The game includes the following contents:

Decide on a player to go first and have that player choose one of the seven role cards. He or she performs the duties of the role of choice, as follows, at the beginning of each round:

Once the first player chooses a role, the second player must choose one of the six remaining ones. This continues until each player has picked a role once. Place a doubloon on any role card that wasn't used and start the process over. The player that chooses the role with a doubloon on it gets to keep that doubloon. Continue adding doubloons as long as no one uses a particular role.

The game ends when one of three things happens:

The winner is the person with the most victory points when a concluding event occurs. In case of a tie, whoever has the most goods plus money is the winner. On the off-chance that there is still a tie then the game is drawn and both players win.

Puerto Rico can be difficult to learn but once players understand all of the rules and the strategy behind them, they will find that it gets easier.

There is a lot to do during the game, but the key to winning is to avoid getting distracted and focus on a few activities that lead to victory points. If you plan to earn points by shipping goods then you should be looking to maximize your production and the amount you can ship. If you want to earn points by buying buildings, then ignore the shipping game and focus on buying things that will help you get the buildings which earn the most points.

You should also pay attention to what your opponents are doing. If the player before you needs to produce goods then be ready to take the Captain and ship goods after that player produces. Better yet, take the Captain when you're the only player who has goods to ship.

Another expansion was planned early in 2009 but was canceled. Instead, an anniversary Treasure Chest that included expansion parts to many Alea games was published. The Puerto Rico portion had new buildings and the addition of the Nobleman role.

In 2004, Alea and Rio Grande Games published San Juan, a card game version of Puerto Rico. This is a lighter and faster version of the game for two to four players.

There are also computer versions of San Juan and Puerto Rico available for play on iOS devices.

Puerto Rico is a terrific game to help build strategic game playing skills in young players. While the game would be frustrating for those under the age of 12, many teens will enjoy the planning and plotting necessary to succeed here. It's also a fun addition to any game night.

Comments
© 2006-2021 LoveToKnow, Corp., except where otherwise noted. All Rights Reserved.
An Overview of the Puerto Rico Board Game