Introduced by Parker Brothers in 2008 as a new and improved version of the classic board game Sorry!, Sorry! Sliders, is a quick paced game that puts a fun twist on the original favorite. The new take of the game is similar to shuffleboard as players slide their pawns down the track, scoring points or knocking other players' pawns out of the game. Recommended for players ages six years old and up, the game is a perfect choice for a family activity or when young friends get together. Since the game is easy to play and simple to understand, younger children should enjoy playing the game with older family members or with adult supervision.

How to Play Sorry! Sliders

Although older children might get bored after playing the game repeatedly, Sorry! Sliders is a fun game for all ages. Playing an entire game only takes about ten minutes, making it a good choice for a quick paced game to play between other games. The game is for two to four players.

To Play the Game

There are two double-sided game target score boards included in the game. Having four distinct game choices increases the fun of playing Sorry! Sliders. The four games include the following: 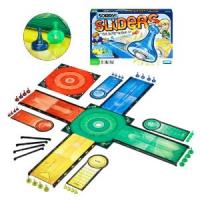 In addition to the two game target boards, other game pieces include:

If you love playing games online, Sorry! Sliders is free at many different online game websites. The virtual version of the game is played in a stle similar to the actual game. As you play, the object of the game is to slide your virtual pawns into the home space or knock your opponant's pawns into the space marked "Sorry!". This fun shuffleboard like game is available to play for free at Electronic Arts (EA) and Xbox Live Marketplace Arcade.