The Ticket to Ride board game, manufactured by Days of Wonder, allows players to build railway routes through different locales using plastic train cars and a board that represents a map of the area. Ticket to Ride is a set collection game like rummy. However, instead of just laying down melds of identical cards for points, players use the cards to claim train routes to connect cities. Gameplay is for 2-5 players aged 8 and up, and takes between 20 minutes and an hour to play, depending on the decisions players make and the pace at which they do so.

Ticket to Ride can be purchased at hobby game stores and mass-market retailers such as Toys R Us, Walmart and Target. If you'd rather shop online, try at Amazon or Fair Play Games.

How to Set Up Ticket to Ride

The first steps in setting up the game are sorting the plastic train cars by color and separating the card deck into train car cards and destination cards. Then you can get ready to play.

The object of this game is to get points by making train routes. Each route has a predetermined length and color that is printed on the board. For example, the route from Los Angeles to Las Vegas on the original North America version is made up of two gray rectangles. This means a player can make this route using two gray train car cards. It's not possible to make it using cards of another color or using a different number of cards. Note that the color of the route is unrelated to the color of a player's plastic train cars. The yellow player can make a gray route, for example. 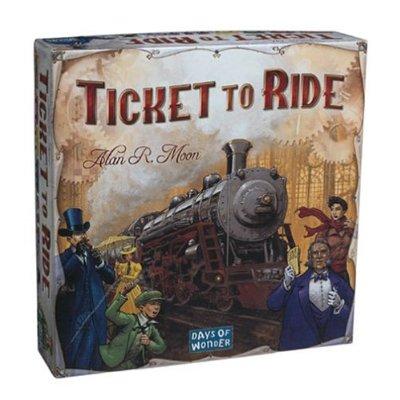 During his or her turn, a player can do one of three things:

There is no card limit. Players can have as many cards as they like. Play passes clockwise around the table.

The purpose of creating routes on the board is to score points. Points are assigned as follows:

Players get additional points for fulfilling the routes described on their destination cards. There is also a 10 point reward for building the longest string of connected routes. Players lose points if they have unfulfilled destination cards left in their hands at the end of the game.

Strategy and Ending the Game

Strategy comes into play in this game since the number of routes is finite. A player cannot play his or her trains on a route that has already been claimed by another player. Each player has to decide if using a turn to collect more cards to gain more potential points is better than playing a less valuable route right away to lay claim to it.

The Ticket to Ride game ends when a player gets down to two or fewer trains at the end of his or her turn. Then each player gets one more turn before tabulating scores. In the event of a tie, whoever has the most fulfilled destination cards wins.

The original version of Ticket to Ride features a map of North America. There is also a Europe version of the game, and there are several expansion sets, including:

Fun For Train and Strategy Enthusiasts

Ticket to Ride is suitable for children and adults alike. The train theme appeals to kids, and will soon have then planning out their routes while simultaneously learning about maps and how to read them. Grown-up players will enjoy the strategy angle, and you can keep the game fresh and exciting by adding some of the available expansion packs.