Common games can take on a new dimension when you play a version made from wood. Wood adds a durability and beauty that is hard to replicate in other materials. These wooden board games offer something for almost everyone, from kids to adults, and from travellers to homebodies to those who love the great outdoors.

Since chess, checkers, and backgammon all use the same board, an all-in-one set is ideal. Hayneedle sells a stylish-board and high-quality wood playing-piece version for about $50. One handy feature of this version is that the game board folds in half and all the play pieces are stored inside. It also has convenient handles built into the wood frame, making it easy to travel with.

This kit is especially good for families with a wider age range among their children since checkers can be played by relatively young children while chess can be challenging for the older ones. Backgammon, a two-player game of luck and strategy, falls somewhere in between the two in complexity. All three are great family games. Strategy games like chess, checkers or backgammon can improve a child's critical thinking and socializing skills. 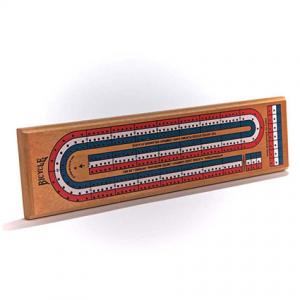 This card game, which originated in England, consists of a wooden board, wooden or plastic pegs and a deck of standard playing cards. The wooden crib board is used to tally the score. The goal of the game is to be the first player to cross the finish line - usually with 121 points -- by playing and grouping cards in combinations to gain points.

The game is relatively inexpensive, usually under $10, and can be played by two, three or more players of just about any age. The Bicycle 3-Track Color Coded Wooden version received 4.5 stars out of 5 by Amazon customers who noted the game's simplicity and durability.

Four in a Row

Four in a Row can be purchased as a plastic game (called Connect Four) at a department store, but for one that is more durable - and nicer looking - try the wooden version from Monkey Pod games. This two-player strategy game works well for road trips or even outdoors when camping.

Players add wooden chips to a vertical board and attempt to be the first player with four in a row. Besides teaching strategy, in younger children the game be used to promote fine motor development or hand and eye coordination, though the game is not recommended for kids under three years old. The game sells for around $20. 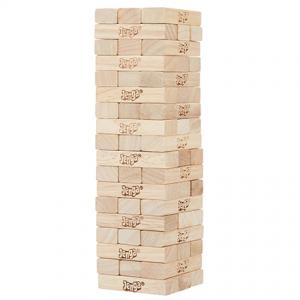 Possibly one of the more popular wooden games is the game of stackable chance - Jenga. Jenga was first introduced to the market in 1980s and has expanded to include variations like Jenga Boom, in which players race against a timer. Designed for players of all ages, the game is played by removing a wooden block from the carefully built vertical stack and placing it on top without tipping it over. The player who causes the stack to fall, loses.

The classic Jenga game sells for less than $10. For $125 get the outdoor version, Jumbo Jenga, which stacks three feet high, or save some money and build your own. The original version is consistently a top seller on Amazon and receives nearly 5 out of 5 stars in customer reviews. Reviewers point out that the game is truly multi-generational and appeals to everyone in the family.

Ludo, developed in Great Britain near the beginning of the 20th century, is a simplified version of the traditional Indian board game Pachisi, and is similar to Parcheesi. This quick-playing game requires two to four players and is excellent for family game nights. It is popular all over the world, from India to the U.S. to Europe, and goes by many different names.

The game advances as players move their four pegs toward the finish line based on the roll of the dice. The first one to correctly get all the pieces in their home column wins. Monkey Pod Games sells two versions, one compact and the other larger in size, each for around $20. According to their website, the game is "popular worldwide, particularly on the palm spotted banks of the Caribbean and the frozen Swedish tundra."

For young children a great wooden game option is Memory. Children take turns uncovering a tile and then attempting to find its match. If a match is found on his turn, the player continues until no more matches are found. The game is educational for young kids as it helps them improve their memory and concentration.

The Maple Landmark Company in Vermont offers several wooden versions with themes as varied as American icons and pirates, so finding one your child enjoys should not be difficult. These games cost about $25.

Sudoku, long popular in Japan, became a worldwide sensation in 2005 when newspapers began including a sudoku puzzle in their daily pages. Part of the appeal of the game, according to The Economist, is "its rules are as simple as its solution is complex. On a board of nine-by-nine squares, most of them empty, players must fill in each square with a number so that each row (left to right), column (top to bottom) and block (in bold lines) contains (the numbers) 1 to 9."

Games are developed with various degrees of difficulty, from beginner to expert. Some wooden versions of the game, like this one from Wal-Mart (pictured), can be played individually, competitively or with a group. It sells for just under $50. Playing sudoku can improve a person's critical thinking skills while also building their confidence to complete challenging tasks.

If you want an outdoor game and have plenty of space, try your hand at the 1000-year old Viking game Kubb (pronounced koob), also called Viking Chess. Described by some as a hybrid of horseshoes and bocce ball it can be played strategically or in a more happy-go-lucky way which is why it appeals to players of all ages and skill levels.

The game is played on a field designated by four corner wooden pins. The rectangular field can range in size from 7 to 15 feet wide and 15 to 30 feet long (basically a 2:1 ratio). Once the field of play is established, each team sets up five chopping blocks (kubbs) on the imaginary line created between the corner pins. Then, taking turns, opposing teams try to knock down their opponents' pins by throwing casting pins, in an underhand toss like in horseshoes, at the their opponents' kubbs. The first team to knock down all their opponents' pins, wins.

Make your own game or purchase it online starting at $60 from Old Time Games.

Make Your Own Games

Wooden board games are fun to play, but they're also a lot of fun to make. Get the family together and craft your own game out of wood using board game templates and then spend the evening playing your new game together. Whether you purchase them or make them yourself, board games crafted from wood are durable and can be passed down from generation to generation.