Of the 10 dice games listed below, some are scored, while others involve gambling with stakes. The games that are scored can be played alone, you'll merely be competing against yourself and trying to beat your highest score. The rest involves gambling with stakes of your choice, from cookies to poker chips.

It can be great fun to play poker with dice. Poker dice is played for stakes or you can simply play it for fun. Each player needs a standard set of dice, and the object is to create the best possible poker hand in three throws.

How to Play and Rank Hands

After each toss, any dice a player wants can set aside and another throw taken until they've had three throws. Just as in playing poker with cards, the hands are ranked from highest to lowest:

After each person has played, the hand with the highest rank wins the round! 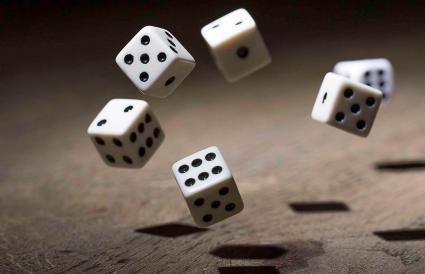 This is a fast-paced dice game in which you score the most points by rolling the fewest 6s.

Sevens Out is a simple game of luck, which only requires two dice and a score sheet. How to play:

Ten Pins, a dice game version of ten-pin bowling, can be played alone or with others. All that's needed is two dice and a score sheet. How to play:

Aces is played with five dice, and the players wager on the game. Each player starts the game with five dice, which they lose related to the numbers they throw. How to play:

Five dice are used in Battleship, Captain, and Mate. It played for a pot, but is often is played for drinks. How to play:

Centennial is played with three dice and requires board, which can be drawn on a large piece of paper. The board consists of a row of 12 numbered squares. Players record their positions on this board by using their initials or some other distinguishable marker. The aim of Centennial is for each player to move, in sequence, from one on the board, up to 12, and then back to one again.

If you're a golf fanatic, a die version of the game can be played with three dice and a score sheet. How to play:

Fifty is a simple, fast-moving game played with two dice, that requires a score sheet. How to play:

Slam is played with three dice and the object is to lose rather than win. The aim of the game is to leave the game by scoring 15 points as soon as possible. You do this by rolling a slam. 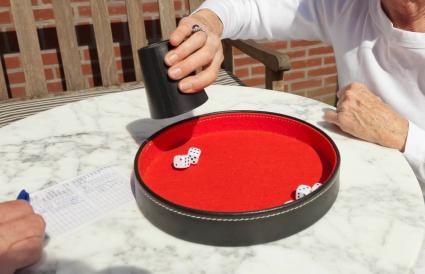 Playing Dice Is Fun and Entertaining

There are simpler dice games for kids but there are many fun dice games for adults that can be played alone, with adult friends or even at a party. Whether you are stuck in a waiting room or at home or just want to socialize with friends playing dice is a fun and entertaining way to pass the time.

Comments
© 2006-2021 LoveToKnow, Corp., except where otherwise noted. All Rights Reserved.
10 Fun Dice Games for Adults to Beat the Boredom Odds