Board game versions of popular game show The Price Is Right have been around for many years, with recent editions coming closest to recreating the real thing. If you are looking for a fun way to spend time with your family on game night, look no further than The Price Is Right board game.

Play The Price Is Right at Home

The Price Is Right is the longest continually running game show in television history. It has survived the retirement of long-time host Bob Barker and the deaths of iconic announcers Johnny Olson and Rod Roddy. The popularity and play-along-at-home element of the game show has led to several editions of the Price Is Right game.

The first version of The Price Is Right for families to play at home came in the 1970s, followed by two more versions from Milton-Bradley. The company then updated the game in 1986, which added new prizes and prices but removed the Big Wheel, one of the most recognizable features of the television series. Endless Games released its first attempt at the game in 1998, which was very close to the 1986 edition. In 2004 the game saw a complete overhaul, making it the most like the television series that had yet been produced.

Price Is Right Board Game Versions

With the immense popularity of the show, several companies jumped on the chance to create this fun board game allowing the masses to play this fun game. Although the board game has seen major updates throughout the years, the main playing concepts and rules have generally stayed pretty similar. The biggest update can be seen in the most recent electronic tabletop version.

The first release of this game was in 1958 by Lowell Toy. This board game was designed for those age eight and older gearing it towards families.

In 1964, Milton Bradley released their first version of the Price is Right board game.

This version was released by Milton Bradley in 1973. The game came with cards, and a board, and was geared towards those age 10 and older.

Milton Bradley released two editions improving the questions and adding more variety. This vintage game can be purchased on eBay if you have a soft spot for classic games.

Milton Bradley released this version in 1986 giving the game a refresh.

Expanding their fan base, the Price is Right board game became available in Dutch in 1990.

Price is Right 1998 Board Game

The 1998 Endless Games version came with props for bidding, as well as the board, play money, and images of prizes.

Endless Games released this update following their 1998 success with their first edition.

The UK version is geared towards age eight and older and was released by Paul Lamond.

As the show gained more popularity, the game was released in several more languages making it fun for people all around the world.

Forgoing the board, this all in one game is super easy to set up. Nostalgic players may miss the big board and cards, but many will enjoy the convenience of this travel friendly game. 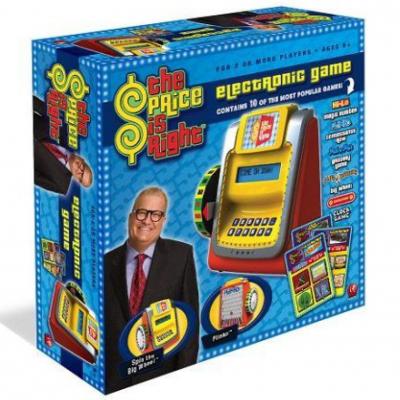 The Endless Games version of The Price Is Right includes everything that you will need to play many of the pricing games seen on the show, presented with an accompanying DVD. If you're very familiar with the pricing games themselves, you can also add to the board game's lineup using some of the included accessories and recreating the games yourself. The game also includes the famous Big Wheel, with the numbers in the right order. Rather than including actual items for guessing prices, there is a list of items and prices are guessed on a dry erase board.

The games in The Price Is Right board game work in the same manner as they do on the television show. Each of the over 40 included pricing games has its own rules, but just like the game show, the overall format remains the same. The game itself is composed of three segments:

A wheel is spun to determine which pricing game a player will compete in. The host can also set up her own schedule for what games will be played and in what order. In more recent versions, players roll dice to determine what year they will have to guess the price of items for.

Board Games Versus Game Shows

While a board game will never have the same excitement provided by a live studio audience and a television audience of millions, you can still test your pricing skills and see how you might fare on the show. For fans of The Price Is Right, this can be a wonderful way to spend some time with family and friends without the travel expenses of a trip to Television City, California.