When it comes to teaching your children the alphabet and helping them learn to recognize letters, flash cards and singing the "Alphabet Song" can get old. ABC learning games offer a fun way to help children learn the alphabet by providing an engaging environment that will help them retain what they learn. Turning these basic skills into something fun and interactive will have your kids actually looking forward to their next lesson.

Dr. Seuss Super Stretchy ABCs gets kids moving as they practice their alphabet. Similar to the game Twister, kids spin the spinner and must place their body parts on the correct letters. They earn points for successfully completing their body part to letter challenges. Designed for ages 3 to 6, the game has earned rave reviews for keeping children's attention as they learn their letters. 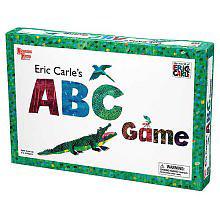 Eric Carle's ABC Game features the illustrations from the popular author's ABC book. Animal pictures are used to help children understand the differences between big and little letters as they move around the board collecting letter cards. Because there is not much of an objective to the game other than to collect matching cards, it may not be challenging enough for the older end of its 3 to 7 age range.

Super Why's ABC Letter Game does more than just teach children to recognize letters. It also helps build rhyming, early reading and spelling skills. Play involves choosing cards to complete tasks while taking on the super powers of the show's characters. Children from ages 3 to 8 will enjoy playing alongside the characters from Super Why as they try to be the first to reach the finish line.

Goodnight Moon My World ABC Game turns images from this popular children's book into alphabet tiles. These tiles may be used to play five different board games. This game is best suited for younger children, especially those who enjoy the book Goodnight Moon. 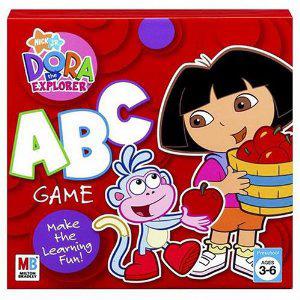 Dora the Explorer: ABC Game is a simple game that has children match letters with pictures and rewards them with tokens. While it may more of glorified flash card practice than a complex board game, the ability to earn tokens will motivate children, as will the pictures from Dora the Explorer.

Themed ABC games will appeal to children with specific interests and help them learn subject-specific vocabulary as they read and make words related to the games' themes.

Undersea Alphabet Soup from Melissa & Doug is a letter-learning and spelling game designed to play in the pool or bath tub. Kids use water-themed letters and challenge cards to play seven fun games, including spelling undersea words, unscrambling letters to make words, and finding specific letters. The game is designed to appeal to children from ages 4 to 10 with special games for every skill level, and may be appropriate for some 2- and 3-year-olds as well.

Goodie Games' ABC Cookies is a tasty way to help children learn their letters and build basic spelling skills. While the plastic letter cookies cannot be eaten, children will enjoy finding letters of the alphabet, building consonant-vowel clusters, and learning letter sounds. Designed for children 3 and up, parents praise it for its cute cookies and the ability to play multiple games.

Alphabet Zoop comes with four animal-themed letter games. Children can practice matching letters with words, race to put letters in alphabetical order, and learn basic spelling. The game can be played with children as young as 2 and may also be used with bilingual children. 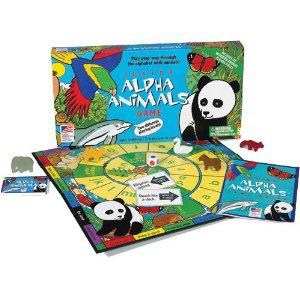 Grandma's Trunk is a unique alphabet game with a different look. Using a box designed to look like a trunk children take turns putting cards in alphabetical order, following letter sequences and spelling words, all related to items you might find in grandma's trunk. The game is designed for children aged 5 and up.

General alphabet games combine multiple words and other elements to help children focus on learning their ABCs and letter sounds. 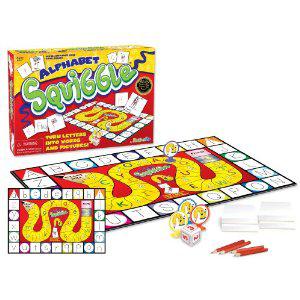 Alphabet Squiggle is designed to boost creativity and letter recognition in children aged 4 to 7. As players travel around the board they practice writing letters and creating unique pictures, making the game more fun than learning-focused. The game can also be played with the Alphabet Squiggle On-the-Go pad, which turns the game into a travel version.

Scrabble Alphabet Scoop is designed for children who already know their letters, but could still use occasional practice learning how to spell words. Though the game is designed for ages 8 and up, younger children and their parents will also have fun racing to scoop out the letters to spell the words on their word cards. This game is active and energetic, so be prepared for some clean-up afterwards.

Sequence Letters helps children aged 4 to 7 learn their letter sounds. To play the game, children draw letter cards. They then match the letters on those cards to pictures on the letter board in an attempt to get five chips in a row. Cards come with colored squares in the corners that correspond to colored squares on the board to help younger players make the connection between letters and word sounds. Each card also features upper and lower case letters to help kids practice recognizing both types of letters.

It can be hard to get children to sit still for a game, especially younger children, so when you play these ABC learning games, focus on the skills that are being built and less on actually finishing the game. If your children get bored playing the same game over and over try a new one or switch up the rules of the game to make it more entertaining. Most children's ABC games are designed to be played multiple ways and are simple enough that you can add your own rules or allow your children to play them in their own way, as long as they are still building their basic letter recognition and word skills.