If you love watching Family Feud the game show, you'll love playing Family Feud on your computer or mobile device. Play alone or against others in these exciting versions of the classic game show where you're challenged to decipher the most popular answer other people gave to a question.

This original online version incorporates all the fun of the game show with simple graphics and fun sound effects. Since it's free to play, there are a few advertisements that pop up during game play. With four rounds of regular play and two tries on the Fast Money portion, a single game doesn't take more than ten or fifteen minutes to complete. The game starts with two rounds where you get twenty seconds to figure out the top six answers to each question. Game show rules apply, so three wrong guesses and the round is over. In round three the points double, and you have to guess the top five answers. Points triple in round four with only the top three answers on the board. In the Fast Money round you get fifty seconds to answer five questions then fifty-five seconds to make a second guess on each question. If you get 200 points, you win. Then, the game shows the top answer for each of the fast money questions. Eldergadget gives the game a favorable review, raving it's "so easy to play" and "lot's of fun."

You can sign into your MSN account and earn badges each time you play or play as a guest on MSN Games for free. Adobe Flash Player is required, and you can use your keyboard to enter guesses and submit them. If you've never played before, click on the "Learn to Play" tab in the top right corner for step-by-step instructions. 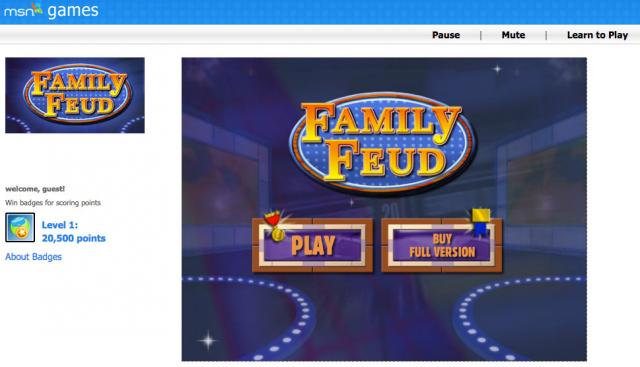 Purchase the 2010 video game version for around $10 in the PlayStation Store if you've got a PS3. You'll need a PlayStation Network account to play the multi-player variation with others online, but also have the option for solo play in this rated E for Everyone game. Since the game is more developed than the free online versions, you'll get more hilarious graphics including family avatars. IGN says this version is "an easily digestible game" and a "quality PSN title worth" your money.

Family Feud 2 is the updated version of the original single-player game. In this version, round one features seven possible answers while round two features six. Round three includes the top five answers, and round four features the top four. The fast money round is played the same as in the original game.

At GameFools.com, there's no registration or fee required; all you need is Adobe Flash Player and your keyboard to play. The game opens in a fairly small window without the option to go full-screen, but it's big enough to see the answers as long as you don't type in any long ones. Eighty-five percent of GameFools players give this version the "cool" rating. 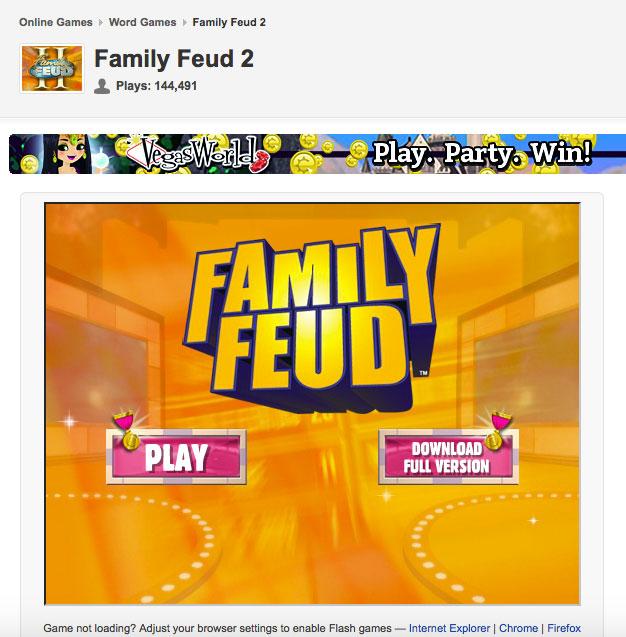 If you prefer fewer distractions around the actual game, arcadespot is the website to play it. While you won't get a full-screen option in this free version here either, the space on either side of the game window is gray and blank.

If you want to take Family Feud on the go, this free mobile version is ideal. Family Feud Live! is a fun, multi-player version of the original online game rated T for Teen. Created by UMI Mobile, the android app is rated 12 + because some of the questions relate to topics like tobacco and alcohol. You'll need Android 4.1 or higher and a linked Facebook account to play with friends. The more you win, the more coins and tickets you earn to keep playing. While the app is free, VIP members pay up to $5 in a monthly subscription to ensure enough tickets for unlimited play. Reviewer Nik says this version has "enough variety (of modes) to suit any amount of time availability" but, technical issues and poor explanation of the coin and ticket systems make it less appealing as a long-term game. 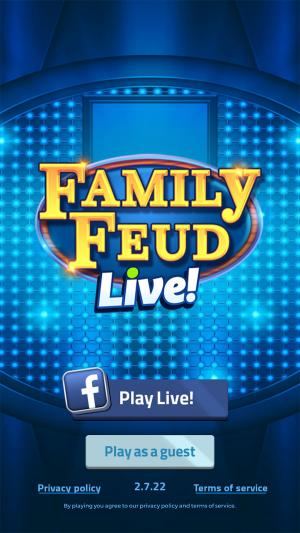 Start by inviting your Facebook friends to compete either in a head-to-head contest or a small group tournament. You can even use the in-game chat to trash talk each other as you play. Next, choose the mode. Then, each player reads the question and types in an answer. The auto-fill feature helps ensure you select appropriate answers. There are three modes of play to choose from:

No matter what type of device you own, you can play this exciting version of Family Feud.

If you're looking for an easy, fun way to play Family Feud alone or with friends, these three versions are your top answers. You'll get the excitement and amusement of guessing what others think from any online version of the game.